On June 23, 2005, the Chinese Consul General to Germany visited Frankfurt. Opposite the consulate, people from human rights organizations and Falun Gong practitioners held a protest activity to remind the Chinese Communist Party (CCP) and the German officials who were attending the opening ceremony to pay attention to the many human rights abuses that are happening in China. They also called attention to the over one hundred thousand prisoners of conscience detained in the country's prisons and forced labor camps, as well as the persecuted Falun Gong practitioners.

The president of the International Human Rights Association, headquartered in Frankfurt, said, "We think today is a very good opportunity to remind people to pay attention to the Chinese prisoners of conscience. In China, there is a lack of human rights, lack of freedom of the press, freedom of information and freedom of speech.

After photos of Ms. Gao's disfigured face were publicized, her case shocked people and received a lot of attention in the international community. Her case was also the first case study in the "2004 United Nations Human Rights Report on China's Persecution of Falun Gong." The exposure of Gao Rongrong's case made the CCP extremely angry. On March 6, 2005, Gao Rongrong was re-arrested and imprisoned. On June 16, 2005, Ms. Gao died from the atrophying of her internal organs. Before she died, all news concerning Gao Rongrong was strictly blocked by the CCP. 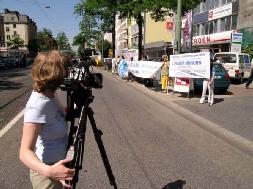 The media conduct an interview

Mr. Wu, who was participating in the protest, hoped that Chinese officials could take Mr. Chen Yonglin, the former 1st Secretary of the Chinese Consulate in Sydney, Australia, as an example, consider the Chinese nation's interest as the first priority and step forward to expose the CCP's persecution of Falun Gong. Mr. Wu said to a reporter, "We hope that staff members of all Chinese embassies can uphold their conscience like Mr Chen Yonglin has done, and take their own initiative to expose the crimes of the CCP. This is not challenging the Chinese Government but helping the Chinese people to be rid of the CCP's persecution."

The mayor of Frankfurt, who was participating in the opening ceremony of the Consul General, also expressed that, although the economic interactions between China and Germany are very close, China's human rights conditions should still be improved. She hoped that human rights will be respected more.

This reporter also hoped to be able to interview the Chinese Ambassador to Germany, Ma Canrong, but was rudely prohibited by staff members at the consulate. Ma Canrong was then escorted into the consulate by security guards, without making any more public appearances.

“The Epoch Times: Former Chief of Shengyang Justice Bureau speaks of his exile”