Russia: Practitioners in Irkutsk held a Rally on July 20th to Call for an End to the Persecution (Photos)

(Clearwisdom.net) On July 20th six years ago, the Chinese Communist Party (CCP) and the Jiang Zemin regime initiated the brutal persecution against Falun Gong practitioners. So far, the number of practitioners persecuted to death has reached over 2,700.

On July 20th 2005, the Russian practitioners in Irkutsk held a rally at the statue of Alexander III to call for an end to the brutal persecution against Falun Gong. During the rally, some practitioners demonstrated the exercises and others distributed leaflets. Most passers-by stopped to look at the photo exhibition of the cruel torture methods used during the persecution. 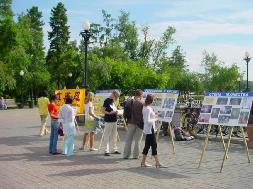 “Sweden: Practitioners Call for an End to the Six-Year Persecution (Photos)”

“Who is Obstructing the Implementation of China's Laws?”