(Clearwisdom.net) On July 21, 2005, when Party Secretary of Henan Provincial Party Committee of the CCP Xu Guangchun led a delegation to visit San Francisco, he was met with a criminal lawsuit lodged by the World Organization for Human Rights. The organization accused Xu Guangchu of committing crimes of torture and genocide during his tenure against Falun Gong practitioners. So far, 95 Falun Gong practitioners from Henan Province are verified to have died as a result of the persecution. The actual death toll is likely to be much higher. 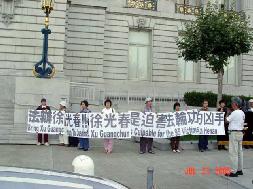 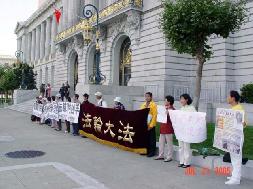 According to U.S. law, people who commit the crime of torture outside the U.S. can be punished inside the U.S. The U.S. Customs and Immigration Law also prohibits people who committed the crime of torture and violated human rights from entering the U.S. One of the plaintiffs is a Falun Gong practitioner who is now living in Mainland China. He was forcibly sent to Henan Province's No. 3 Forced Labor Camp and suffered torture there. He was forced to renounce his belief and give up cultivation. He was also forced to do slave labor, producing exported products for the Rebecca Hair Product Company.

A lawyer from the World Organization for Human Rights pointed out that CCP officials who have participated in the persecution of Falun Gong practitioners will also be served with civil and criminal lawsuits one day in their own country. The international community will no longer tolerate those who use torture and commit the crime of genocide against their own people.

Prior to this case, several senior CCP officials, including Jiang Zemin, have been sued in many countries for persecuting Falun Gong practitioners.

“Korea: In the Sixth Year of Resisting the Persecution, Falun Gong Practitioners Hold a Large-Scale Parade in Seoul (Photos)”