(Clearwisdom.net) The "Truthfulness-Compassion-Forbearance" International Art Exhibit was held at the Sun Yat-Sen Memorial Building in San Francisco's Chinatown from July 16 to 17. The exhibit displayed 38 paintings, all by Falun Gong practitioners. The paintings depict the beauty brought by Falun Gong to practitioners, the celebration of high level beings and practitioners, and practitioners' unyielding faith in the face of the most brutal persecution in the history of humankind. The paintings were well-received, and many visitors wrote their comments in the exhibition notebook. A Japanese tourist wrote: "The paintings are so touching, I can't hold back my tears." 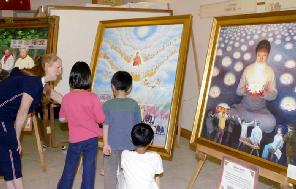 Children also come to the exhibition

The exhibit was previously held at the San Francisco Federal Building and the Santa Clara County Government Building respectively, and the outcome was very good. The organizers of this exhibit said that they are planning to hold more art exhibitions.

The painting, "Daddy, Come Back!" depicts a real story: Little Fadu's father was persecuted to death by the Chinese Communist Party (CCP) for his belief in Falun Gong. Over the past several years, she and her mother have traveled around the world to tell her father's story and to call for help for the practitioners who are still being persecuted. Looking at the painting, I heard little Fadu's cry: "Daddy, come back!" Mom told little Fadu: "In China, there are many practitioners like your daddy. They are being persecuted and no one knows their suffering."

Another painting, "Why," depicts a small boy behind the iron bars of a prison. The boy appears to be only 4 or 5 years old with cuts and bruises all over his body. His sad eyes show confusion. Behind him, his wounded mother lies on the floor in heavy shackles. It seems that the boy is asking: "Why would the police torture my mom and me?"

A visitor was outraged by the CCP's brutality after seeing this painting. He said: "How can they treat a little boy like this! In any country, children are protected. It is inhuman to treat children so brutally." 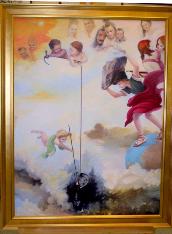 Humans and gods are both outraged by the persecution.

Zengchen Meihe, 85, is a Chinese person from Myanmar. She had very good calligraphy training in her childhood and she came to the exhibit to offer free calligraphy for the visitors. She said that she recently started to practice Falun Gong and has read the teachings seriously. Her former humpback has gone and she can now stand upright. 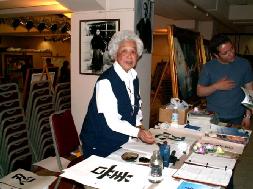