Daniel came from Bolivia. In July1999, while visiting Taiwan, he read about the persecution of Falun Gong practitioners in China. He found that Falun Gong was pretty good and wanted to know more about it. However, shortly afterwards, he had to go back to his home country of Bolivia.

Daniel had always been interested in cultivation practice. After returning home, he read a lot about Buddhism, and acquired for himself a copy of Zen Buddhism teachings. From what he read, to practice cultivation properly, he realized that he needed to have a good teacher and be prepared to live away from society. Although he was prepared to do that, leaving his family behind seemed somewhat irresponsible. Besides, he did not have a teacher. So, that option was out. Despite the setbacks, he continued to read books on Buddhism and tried to find out more about the true meaning of life.

It was not until 2004 that Daniel had another chance to visit Taiwan. One day, on the shelf of a bookstore, he came across the English version of Zhuan Falun. Flipping through the pages to the section on "Dissolution of Karma," his eyes suddenly lit up. The more he read about it, the harder it was to put it down. He then turned the page to find out more. "What a book, I must read it carefully," he exclaimed. So he bought the book.

In less than two weeks, he read the book from cover to cover and wanted to learn the exercises. But, there were no English-speaking Falun Gong practitioners around, and his Chinese was limited.

"Taiwan is so big," he said to himself, "there must be some practitioners who can speak English." After asking around, he found a group in Taipei that studied the Fa in English. So, from Tao Yuan where he lived, he traveled to Taipei to join the group whenever he got a chance.

Later, he found another group nearby that practiced Falun Gong in the morning. So he joined them every morning. Whenever he missed a morning session, he would try to make it up in the evening. Before long, he started to reap the benefits of Falun Dafa. He also began to appreciate the difficulty of cultivation practice.

Daniel said that he had plenty of spare time in the past, which he didn't know how to use. But now, he was always occupied. His life was meaningful and full of satisfaction.

Daniel had been smoking for over ten years. Every time he wanted to quit, he was unsuccessful. He shared his story about how he quit smoking: "...It happened on that day at the bookstore when I first came across the book, Zhuan Falun. As I was flipping over the pages, a paragraph on smoking caught my attention -

"Some people do know it's bad, but they just can't quit. I can tell you that it's actually because they don't have the right thoughts guiding them, so it's not easy for them to just up and quit. See yourself as a cultivator, and treat it as an attachment today and try to quit, see if you can quit. If you really want to cultivate I urge you to quit smoking today, and I guarantee you can quit. In the field of this class nobody thinks of smoking. If you want to quit, I guarantee you can quit, and when you next pick up a cigarette it won't taste right."

'This is good,' I said to myself, 'I will give up smoking from now on.' That night, when I tried to pick up a cigarette, I had to put it down immediately - I just could not stand the smell of it. Since then, I have never touched a cigarette."

In speaking about the positive changes that occur in one's nature through practicing Falun Gong, Daniel said that his general disposition and tolerance had improved tremendously. He said that he often lost his temper with his wife and children, but now he could talk things over with them in an amicable manner. He said he was longing to see his other family members and that they would be surprised to see the changes in him. "All these positive things came from Dafa," he said, "therefore, I would like to bring Dafa to my friends, relatives and fellow countrymen back at home" 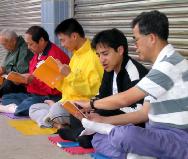 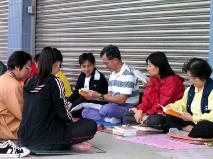 Daniel is the person dressed in black.

places strong emphasis on refinement of one's xinxing, and Daniel shared with us an example of his improvement: After the morning exercise, the group often stayed behind to study the Fa. Sometimes, they would read a chapter from Zhuan Falun, and other times, they would read from Teacher's more recent writings. As Daniel was the only westerner, the procedure would be for them to read one paragraph in Chinese, followed by one paragraph in English read by Daniel. Because he was the only westerner in the group, other practitioners were curious to know more about him and asked a lot of questions, which at times could be personal. Because of the difference in cultural backgrounds, Daniel felt uneasy at having his personal life probed so deeply. So he tried to avoid sitting close to those students who kept asking him so many questions. If they were there first when he arrived, he would try to sit somewhere else. If they were not there first, he hoped that they would not turn up. Then one day, he discovered that his uneasiness must be his own attachment and that he had to get rid of it. He realized that he needed to be more accommodating. As soon as that thought arose, he felt like a big rock was lifted away from him. He felt light. Since then, he does not avoid those students anymore. In fact he found them to be particularly warm and caring. "The problem was with me," he discovered. From then on, Daniel began to appreciate the importance of getting rid of attachments.

On April 30, this year, a large-scale experience sharing conference was held in the northern district of Taiwan, and Daniel attended. Because of his limited knowledge of the Chinese language, Daniel did not know what was going on. When he left the conference after the first day, he told the man who invited him that he would not come back the next day. The man said, "Taiwan is probably the only place in the world where you will find such a huge number of practitioners gather together all at one time. When you return home, you will not encounter such an environment again. You will miss this environment. But, why are you feeling uncomfortable? Don't you think you should overcome this feeling of discomfort?" Daniel thought for a while and said, "You are right. I will come tomorrow." Daniel came the second day. After the conference, and on the way back, he said to the man, "I felt much better today. I didn't have the discomfort like I had yesterday."

Daniel had been thinking about whether or not he should extend his stay in Taiwan. "Taiwan has such a good environment for cultivation, whereas back in Bolivia, most likely I will not have the same environment." Two days after the conference, he called me and said, "I have decided to go back home to Bolivia. I know the reason of my mission in Taiwan. I need to bring Dafa back to the people in Bolivia."

So, a new practitioner who has had only 5 months' exposure to Dafa, now full of confidence, is ready to take up the journey of spreading the Fa.