Commentary: Looking at the Importance of Withdrawing from the CCP from the Perspective of the Revocation of Ex-Nazis' American Citizenship (Photo)

(Clearwisdom) After the Chinese Communist Party Withdrawal Service Center was established several months ago, some young people light-heartedly said that withdrawing from the Chinese Communist Party (CCP) had nothing to do with them because they never joined the CCP. Not long ago, I met an elderly gentleman who has lived abroad for many years. He said he does not like the CCP, but he left China more than ten years ago and is no longer a CCP member. It seems to him that it's unnecessary to publicly announce his withdrawal from the CCP. This appears to be a common phenomenon and is worth thinking about deeply, especially for those overseas Chinese who live in the free world today. On the surface, they have already escaped the control of the CCP's tyranny, so is it really necessary for them to announce their withdrawal from the CCP? During my conversation with the elderly gentleman, we talked about some real stories that happened in the United States. I told him about an American citizen over 80 years old who had his American citizenship revoked because he had been a Nazi several decades earlier. That elderly man listened and nodded, and seemed to understand that quitting CCP is far from being a mere formality.

According to a news report from the Epoch Times on August 27, 2004, the federal court of the United States revoked the American citizenship of an 84-year-old resident of Illinois because he was once a German Nazi henchman and hid this fact when he applied for entry into the United States more than 50 years ago. The U.S. Department of Justice claimed, Romania-born Joseph Wittje, a retired laborer, served in the notorious Waffen SS as an armed guard at a Nazi concentration camp in Germany from July 1943 until the spring of 1945. Wittje entered the U.S. in 1950 and obtained citizenship in 1959. However, when he applied for the visa to come to America, he failed to disclose his membership in the Waffen SS.

U.S. immigration laws were amended in 1978 to allow deportation of anyone who assisted or participated in Nazi acts of persecution. Since 1979, the Justice Department has had an office dedicated to investigating cases of former Nazis living in the United States and has successfully captured more than 90 people. Rabbi Abraham Cooper, an associate dean of the Simon Wiesenthal Center in Los Angeles that investigates the Nazi holocaust said, "Like other former Nazis in the U.S., he came to these shores during the Cold War and left out that part of his life. They volunteered to be a part of the Nazi killing machine."

In addition, according to a December 18, 2004, report from Associated Press, on December 17, 2004, the U.S. Department of Justice requested that an immigration judge deport 84-year-old John Demjanjuk of Seven Hills, Ohio because he had been a guard at a Nazi concentration camp. The U.S. government claimed that Demjanjuk, a retired autoworker, gave false information about his job and residence during World War II when he applied for immigration in 1952.

Recently, I saw a group of historical photos on a web site that really impressed me. The photos show the Nuremberg International War Crimes Tribunal executing a Nazi death camp nurse team. 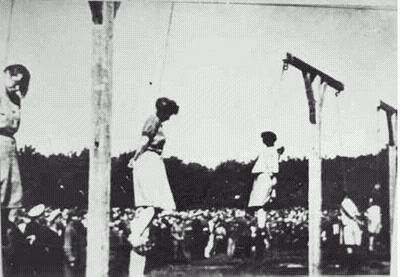 (Photo: In 1946, the Nuremberg International War Crimes Tribunal executed members of a nursing team from a Nazi concentrated camp after authenticating their crimes of genocide against Jews.)

Those former members of Waffen SS and the Nazi Party, who have obtained American citizenship, volunteered to be a part of the Nazi killing machine in the genocide of Jews. Even though the ex-Nazis left Germany and came to the free world where they lived in peace for several decades, they could not evade justice from world courts for their responsibility of once being part of the killing machine. Although the dark days of World War II and the Nazi's persecution of the Jews has become history, people have not forgotten the terror and shame brought on by that terrorist organization's crimes. It is impossible for the former members to escape justice even after several decades.

In the past half-century, 80 million Chinese have died unnatural deaths due to the tyranny of the CCP. This includes outstanding people in business circles, cultural circles and intellectuals; all were persecuted to death in political movements. Millions starved to death during the "Great Leap Forward." Others were tortured to death during the "Cultural Revolution." Tanks and machine guns killed many students and citizens in the June 4, 1989, Tiananmen Square massacre. Others who have been tortured to death in dark prisons include people in Tibet, Falun Gong practitioners, Christians and Catholics who insisted on maintaining their spiritual beliefs, not to mention those who have been persecuted because they hold political views different from the CCP.

How can future generations ever forget the 80 million innocent people who were killed unjustly under the CCP's tyranny? How can we forget the tens of thousands of unfortunate families that were broken up? How can we forget the repeated catastrophes and tragedies that the CCP brought to the world? Future CCP members will achieve a notoriety that is more horrible and disgusting than that of the Nazis.

Today in the CCP controlled China, children are obliged to join its reserve force - the Young Pioneers; young people are pushed to join its youth reserve force - the Communist Youth League; and the CCP invariably bullies adults who have attained fame through their accomplishments into joining the Party. The calamity is intense. The CCP not only commits monstrous crimes itself; it also drags many innocent people along to be buried together with it. It is willing to ruin the lives of 100 million common people, including women and children. When the atrocities of the CCP are brought to light in the future, if those innocent people have not withdrawn from the Party, won't they be implicated together with it? How can walking away from the CCP and coming to live in a free society wash the crimes away? Only withdrawing from the CCP can make you completely clean from now on.

Just as all the Nazi's crimes were eventually exposed, in the near future, the whole world will realize the horrific crimes the CCP has committed. The world will know about the millions of lives that were tragically killed; it will become aware of the physical torment, the massacre, and the brutality of the extermination of people's free spirits and the annihilation of conscience and morality, as well as the destruction of the nation's culture.

Who today, is willing to be associated with any Nazi organization? Those who joined the Nazis before no longer have an opportunity to announce their withdrawal. However, the Epoch Times is giving the Chinese people the greatest of gifts. The Nine Commentaries on the Chinese Communist Party and the CCP Withdrawal Service center are providing each individual a fair chance to make a choice before the CCP is completely called to account.

Withdraw from the CCP and return to freedom and purity.

“Some Thoughts on the Relationship between NTDTV and Falun Gong”