(Clearwisdom.net) Mr. Zhang Biguang came to Australia in 1971 from Malaya. During his first six years in Australia, he went to school in Brisbane and he worked in a restaurant. He worked hard and was highly praised by the owner. He successfully finished his degree by working part-time and studying part-time. 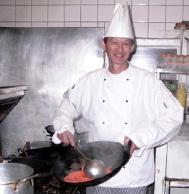 Zhang Biguang got up early and went to sleep late. He often felt tired, stressed and under a lot of pressure. When troubles in his work and life occurred repeatedly, he asked himself over and over again, "What is the meaning of life? No matter how much money we earn, can we buy lasting happiness? Why is happiness so transient and why does it disappear so quickly?" In order to search for the ultimate answers about oneself and living in this world, Zhang went to church and had discussions with Christian friends. He also sought wisdom from philosophies of current and ancient China, foreign philosophies, and from religious scriptures. However, nothing he read in the literature, history, philosophies and religions gave him the knowledge he needed to solve his puzzle about life's meaning.

During that period of Mr. Zhang's life, his health condition showed warning signs. Due to long working hours in the restaurant, he felt physically and mentally exhausted. After he suffered from allergies in 1973, the symptoms worsened year after year. Especially in the spring, he was afraid to go to the park. If he was not careful, the symptoms appeared and his eyes became seriously swollen. Although he took many medicines, they caused side effects, which were themselves unbearable.

One day in February 2000, Mr. Zhang's friend from Singapore sent him the cultivation book Zhuan Falun. This book triggered his innate nature and wisdom. His heart was touched and he felt enlightened. This book had the answers about the meaning of life that had always deeply puzzled him. He found support from the principles mentioned in the book for his own principles of dealing with people and his view towards life. This perhaps embodied the best nature of his life! From then on, Mr. Zhang began his new life - a path of returning to one's true self by cultivating Falun Dafa.

When we asked Mr. Zhang if he experienced any concrete changes after practicing Falun Dafa, he had a lot to say. In the past he felt tired at work, now he no longer feels tired, even working the same hours. In the past, he also had started to lose his hair. Three months after he started the practice his hair started to grow back miraculously and his hair color changed back to black. Six months after he began cultivation, his allergies, which had worsened year after year, disappeared. The scars left from past allergy attacks and from a burn at work gradually disappeared. These changes were only physical, but the essential changes were the spiritual ones.

During cultivation, Mr. Zhang conducts himself according to Falun Dafa's principles of "Truthfulness, Compassion, and Forbearance," which he lives by when dealing with people or matters. Mr. Zhang believes that kindness is human nature, and when your heart converges on pure kindness of inborn nature, your surroundings will coexist harmoniously. When trouble or conflicts arise, you can naturally give up competitiveness and greediness, calmly face your gain or your loss in life, and face everything in your life with honesty, kindness, forgiveness and understanding.

Mr. Zhang said that since he started practicing Falun Dafa, he no longer has any mental pressure. Although he still does the same kind of work each day and sometimes still faces all kinds of problems, his attitude and reactions have totally changed. He no longer haggles over every ounce and no longer complains about unfairness. He replaces anger with a smile. He truly feels that he lives a wonderful life with unselfishness, dignity and righteousness. Regarding his view towards material gain and loss, Mr. Zhang said, "If the customer is happy, it will be my best gift. I shall not be satisfied only from the amount of money I earn."

He gets satisfaction and happiness when he sees people benefit from his giving. It is a kind of happiness that comes naturally while pursuing nothing. From the angle of cultivation, this is perhaps the manifestation of a cultivator's realm. We can say that it is what differentiates a cultivator in dealing with people and daily matters.

“Is It "Healthy Influence of Education" or Bloody Rule?”