(Clearwisdom.net) The 2005 Mid-USA Falun Dafa Experience Sharing Conference was solemnly held on June 26, 2005 at Lyric Opera House in downtown Chicago. About 2000 Falun Gong practitioners attended the conference. At about 3 p.m., benevolent, great Master came in person to the conference hall, and the audience burst into thunderous applause. Master taught the Fa for about 20 minutes. 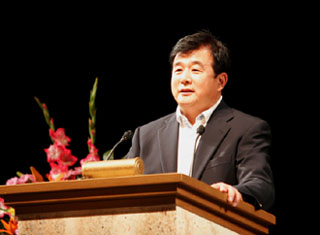 Master comes in person and teaches the Fa

Master pointed out in the Fa-lecture that spreading the "Nine Commentaries on the Communist Party" is not getting involved in politics. The Chinese Communist Party (CCP) has dragged all Chinese people into politics, while telling people to see the CCP clearly for what it is and withdraw from it is exactly helping people to break away from politics. What we are doing currently is not for the purpose of overthrowing or fighting against the CCP. What Falun Gong practitioners have been doing is all for the sake of saving sentient beings. Master said that after clearly seeing through the viciousness of the CCP, many people no longer want to cooperate with the CCP and quit the CCP, and the CCP will cease to exist. However, this is not the fundamental goal.

Mr. Yang felt that the current situation is very different from before. He said that in 1999, when the persecution had just begun, it was like that dark clouds were bearing down on everyone. Through truth-clarification over the past several years, more and more people are now willing to learn about the facts. Many people feel good about the practice and have begun cultivating in Dafa.

At the Fa conference, two western practitioners who have been practicing for less than a year talked about their stories of obtaining the Fa and their experiences of cultivation. One of them abandoned his attachment to alcohol. Another gave up his attachment to gambling.

Mr. Lin, who works near the Chinese Consulate in Chicago, said in his speech that he was fortunate to obtain the Fa because of the Chicago Falun Gong practitioners' persistent effort in clarifying the truth. He said that the practitioners hold sit-in appeals in front of the Chinese Consulate in Chicago 24 hours a day in all kinds of weather. At the beginning, he was very touched and admired the practitioners. Therefore, he wanted to learn more about Falun Gong, but did not start practicing cultivation. One day last year, he suddenly wanted to read Zhuan Falun. He was deeply touched upon reading the book and he found that he understood many questions that he had been perplexed about in his life. In this way, he began his cultivation.

Mr. Liu from Chicago introduced his experiences of holding art exhibitions and parades to clarify the truth. Because the events were sponsored by practitioners and all funds came from voluntary donations from the practitioners, in order to save the cost of purchasing frames for the art paintings, some practitioners who have woodwork experience took the responsibility to make them themselves. Without professional equipment, they had to work in a wet and cold environment, with the temperature sometimes dropping below the freezing point.

A Chicago practitioner who clarifies the truth through writing articles talked about how she abandoned her attachments and corrected herself when she was praised or criticized. She said that her articles were highly praised by her editors and each time she felt quite good about the acknowledgements, but she did not consider it carefully. Later after she submitted another article, an editor sent her a series of links of articles about how to write and edit articles. The editor also kindly pointed out that she'd better start from the very beginning to learn how to write an article and then submit papers. She was quite shocked by this. Later, through other practitioners' help, she intensified her Fa-study and became diligent in practicing the exercises. She also carefully looked within herself and found her attachment to "self". She strengthened her righteous thoughts and continuously abandons her attachment to "self" in doing the work to validate Dafa and tries to melt herself into the Fa.

A practitioner who participated in the truth-clarification in Manhattan said that several months ago, when they went there to explain the facts about Falun Gong, most of the well-dressed Westerners would not stop when passing by the anti-torture exhibition sites. They looked ahead and hurriedly walked by. Nevertheless, with the rapid progress of the Fa rectification and the practitioners' persistent sending forth righteous thoughts, and doing truth-clarification by telling them to learn about the truth themselves rather than listening to some of their Chinese colleagues who were also deceived by lies, the current situation is much different. Many of these people are willing to learn about the facts and even sign petitions to support the effort of opposing the persecution. 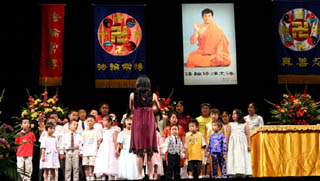 During the Fa conference, about 40 young practitioners from the Mid-USA area Minghui Schools gave performances to welcome fellow practitioners who came from other regions. They recited three poems from Hong Yin and performed songs, "Little Angel" and "I'm a good Minghui School student", as well as "Falun Dafa is good." The young children's innocent and sincere appearance won warm applause from the audience.

The experience sharing conference concluded at around 6 p.m.