On the June 7th, 2005, the House of Representatives of the Commonwealth of Pennsylvania commemorated the first-ever Northampton County Falun Dafa Week in recognition the many outstanding contributions that have been made by the practitioners of Falun Dafa in the Commonwealth.

The House of Representatives

, The House of Representatives is pleased to commemorate the first-ever Northampton County Falun Dafa Week, which is being observed on June 6 through 12, 2005; and

, Also known as Falun Gong, Falun Dafa is an advanced exercise and meditation practice system of mind and body based on ancient teachings. Introduced in China by Li Hongzhi in 1992, it is practiced by more than one hundred million people throughout more than sixty countries worldwide. The practice of Falun Dafa has helped people around the world improve their health, calm their minds, uplift their spirits and deepen the understanding of life and humanity. It also has inspired people form all walks of life to turn away from many forms of destructive behavior. In spite of intense opposition by the Chinese Communist Party, which began in 1999, practitioners of Falun Dafa who live in China have continued to live and share its teachings of truthfulness, compassion and forbearance and to stand up for their rights in a peaceful manner. Hundreds in China have been arrested, tortured and even killed because of their allegiance to way of life that promotes peace and health; and these courageous people deserve the heartfelt respect, support and compassion of everyone in this Commonwealth and throughout our world.

, the House of Representatives of the Commonwealth of Pennsylvania proudly recognizes the observance of Northampton County Falun Dafa Week; notes with pride the many outstanding contributions that have been made by the practitioners of Falun Dafa in this Commonwealth; 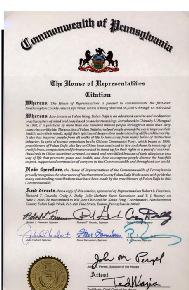 “Former 610 Office Agent Gives Testimony to the Miserable Persecution of Falun Gong Practitioners - Mrs. Wang Yuzhi Recalls the Experience of a Victim and Her Daughter (Photo)”