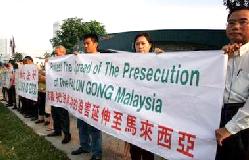 The practitioners gathered along the sidewalk across from the embassy at around 8 a.m. They held banners reading, "Falun Dafa is good," and "Protesting the spread of the persecution of Falun Gong to Malaysia". The appeal lasted for one hour.

Mr. Cai Qiang, the spokesperson for the appeal, said that practitioners were protesting the charges filed against the nine directors of the Falun Dafa Research Centre Berhad (FDRCB), and the fine of as high as 40,000 Malaysian ringgit. The charges were not reasonable and they hoped the Malaysia government would withdraw them.

He pointed out that the purpose of the appeal was to explain the facts of Falun Gong to the Malaysian government and people, and the Chinese Embassy. FDRCB distributed a press release which stated that the nine directors were charged with an offense related to the Companies Act on May 31.

There were six charges, including no company name and registration number printed on formal receipts, not providing an audited financial report and annual report. These were purely technical errors.

The statement indicated that the Chinese Embassy continued to interfere with local practitioners. During the last few years, Falun Gong practitioners applied for registration as an association, but were refused without any reason.

"Falun Gong practitioners submitted a memo to the Malaysia Human Rights Committee about this issue and the committee said they would pay attention to it."

The statement pointed out that, based on many newspaper reports, the Corporation Registration Bureau rejected the Falun Gong practitioners' application because of pressure from the Chinese Embassy.

The statement further stated that after FDRCB was registered, the interference continued. Before the case, the Malaysia Corporation Registration Bureau requested the FDRCB to close for various reasons, one of which being "national security".