On June 11, 2005, New South Wales Falun Dafa Association held an anti-torture exhibit and a press conference in the Belmore Park located in downtown Sydney to further introduce facts about Falun Gong and the CCP's suppression. 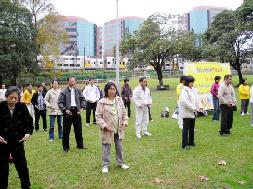 New South Wales Falun Dafa Association spokesperson Mr. John Deller said in his speech: "Falun Gong practitioners believe in Truthfulness-Compassion-Forbearance, while the CCP is good at deception and violence. Under the CCP tyranny for more than 50 years, 80 million Chinese people have died from CCP's despotic rule. Even more so, the genocidal persecution of Falun Gong, which has now been going on for six years, has further exposed the party's evil nature. Today, the miserable scene we display here (referring to the re-enactment of the tortures practitioners face in China) is occurring right now in China. Thousands of Falun Gong practitioners lost their lives and numerous children become orphans. From the practitioners who are demonstrating the Falun Gong exercises behind me, we can feel the peacefulness of Falun Gong."

At present, CCP uses economic interests to manipulate other countries. As a consequence, these countries turn a blind eye to CCP's atrocities. John called upon the Australian government and the Prime Minister to stand out and speak for people who are under suppression in China. He hoped that the Australian government could truly act as what it claimed that the human rights issue would not be affected by the bilateral trade with China.

Practitioner Geoff Gregory said that Australian Minister of Foreign Affairs Mr. Downer issued monthly certificates to prevent Falun Gong practitioners from exercising their rights to hold normal and peaceful appeal in front of the Chinese Embassy in Canberra. The certificate that Mr. Downer issued is only valid for 30 days. However, Minister Downer has signed 38 certificates over the past 3 years. To uphold their freedom of expression, Falun Gong practitioners have lodged a lawsuit in Canberra Territory Supreme Court against the Foreign Minister. Mr. Gregory introduced, "Over the past three years, Falun Gong practitioners throughout Australia have been trying to discuss with Minister Downer on this issue. We even went to his election district to meet with him. We delivered the collected signatures of numerous people who support us. Unfortunately, all of our efforts were not able to let Mr. Downer to realize the harmful effect his actions have caused. We have no other choice and can only take legal actions."

A representative from World Organization to Investigate the Persecution of Falun Gong (WOIPFG) introduced an investigation report prepared by WOIPFG. The report covered investigations conducted by WOIPFG since its establishment about the persecution encountered by Falun Gong. The report indicated that the CCP does not only cruelly suppress Falun Gong practitioners in China, but it has used all possible means to extend the persecution to other countries, including threatening and luring overseas media outlets by promise of gain. He delivered WOIPFG reports to major media outlets.

When giving interview with media outlets, practitioner David Liang from Sydney displayed photos showing the attempted gun-shooting assassination he encountered when he went to South Africa to lodge a lawsuit against CCP officials who participated in the suppression of Falun Gong. He told the media, "South Africa police determined that the shooting incident was an attempted assassination. We encountered the attack when we just arrived at South Africa and drove on the high way to our hotel. The gunmen did not rob any valuables from us. All signs indicated that the gunmen were hired by CCP who wanted to prevent Falun Gong practitioners from suing high-rank CCP officials Zeng Qinghong and Bo Xilai.