) Katrina is seven years old. At school she is a good student and all her schoolmates and teachers like her. At home, she is mommy and daddy's bright child, a young helper. She helps mommy to look after her younger sister and do some simple housework. Katrina should be an unworried little girl, but actually her heart is heavy because her big wish to end the persecution of Falun Gong has not yet come true.

When she was two years old, Katrina started practicing Falun Dafa together with her mother. At that time she was too young to read the book Zhuan Falun by herself. Her mother read the book to her, or she listened to the tape recordings of various lectures. She did not lag behind doing the exercises or in sending forth righteous thoughts. She likes reading the book of Master Li's poems a lot, especially in Chinese. Her mother is a Czechoslovakian and does not understand Chinese, while her daddy is a Chinese national who grew up in Switzerland and his Chinese is not very good either. Katrina made use of all the opportunities to learn from Chinese practitioners. It didn't take long before she could recite nearly thirty of Master Li's poems in both Chinese and German. Her cute appearance when she was reciting the poems in Chinese, with clear pronunciation and a mellow voice, often surprised other Chinese practitioners.

At the time that Katrina obtained the Fa, the inhuman persecution of Falun Gong was already happening in China. In order to let more people know the truth and to end the persecution earlier, Katrina participated in various activities all over Europe with her mother. Although she was unable to tell the facts to people personally, she earnestly did the exercises and handed out leaflets. People were extremely happy to accept leaflets from such a pure and lovely girl. 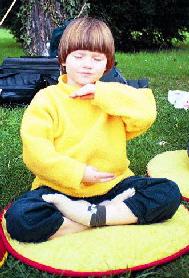 Having now grown older, Katrina can read Zhuan Falun by herself. She knows more and more about the persecution of Falun Gong practitioners in China and the poisoning of people all over the world by the lies of the Chinese Communist Party (CCP) and Jiang Zemin and his followers. She desperately wants to do something to end this persecution. On a vacation with her mom in Czechoslovakia, she and her cousin drew a number of pictures; some showed scenes of sitting in meditation, some depicted the scenes of the persecution suffered by practitioners, and on each picture, the words "Falun Dafa is Good" were written. Then they put the drawings into the mailbox of the Chinese Embassy in Czechoslovakia, in the hopes that the staff of the Embassy could understand Falun Gong and stop aiding the CCP to persecute innocent people. 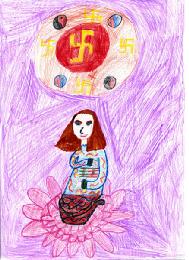 This was drawn by Katrina's cousin, an 8-year-old Czech girl. Katrina and her cousin drew many similar pictures and mailed them to the Chinese Embassy in Prague to express their wishes for the persecution to end.

At her birthday party, Katrina drew a lot of pictures showing Falun Gong's goodness. With the help of her parents, she made the pictures into beautiful cards with a brief explanation for each picture, and gave them to her friends. She also told them and their parents all about Falun Gong.

After attending a weekend anti-torture exhibition, Katrina especially hoped that she could participate in the performance at the exhibition to tell passers-by that Chinese children are also being persecuted simply because they or their parents practice Falun Gong. Practitioners used a picture of an oil painting named "Why" to create a poster for her. In the painting, a wounded young boy and his mother are illegally imprisoned together and the boy's facial expression seems to ask: "Why?" Beside the oil painting was printed an explanation, which told people about the persecution of Chinese children, as well as little Katrina's wishes for the persecution to end. At every anti-torture exhibition, Katrina held the poster and sat to appeal for her young fellow practitioners in China. 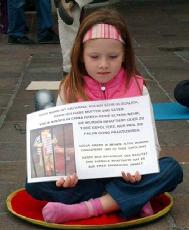 Katrina holding her poster during an anti-torture exhibition

On June 1st, International Children's Day, Katrina used a special method to celebrate the children's festival: she collected signatures for rescuing Falun Gong practitioner Qiu Minghua in China. Ms. Qiu is Swiss foreign student Wang Xiaoyang's mother; she has been put in jail in China for over half a year because she refused to give up practicing Falun Gong. Katrina hopes that Ms. Qiu will be released soon and that the persecution could be finished earlier. If this happened, not only would Wang Xiaoyang be able to re-unite with her father and mother, but many other broken families could be reunited and children could enjoy their happy childhood as before.

On International Children's Day, Katrina wanted to pass on a message to young fellow practitioners in Mainland China: "I really feel sorry that you have suffered so much, but you do not have to be afraid, all of this will be over soon." She said she would continue with her best efforts to let more people know the truth about Falun Gong and the persecution happening in China. More people will then come to help to fulfill her biggest wish: to end this brutal persecution of Falun Gong.

“Dafa Gave My Husband a New Life, but the Persecution Took it Away (Photos)”