Chairman of the British Falun Dafa Association Mr. Peter Jauhal said that the two female Singapore Falun Gong practitioners were exercising their basic human rights, not impeding anyone, and using their freedom of belief and freedom of speech. He wished the Singapore Government could resist the allure and pressure from the CCP, be responsible for its own people and let Singapore people have a chance to understand Falun Gong and the brutal persecution of Falun Gong in China. 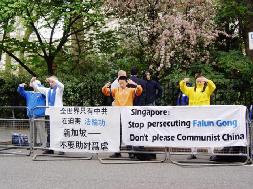 Falun Gong practitioners appeal in front of the Singapore Embassy