(Clearwisdom.net) On May 21 and 22, 2005, Falun Gong practitioners in Houston held a "Truthfulness-Compassion-Forbearance" Art Exhibit at the Westin Galleria Hotel in downtown Houston. About 2,500 visitors viewed all 30 works exhibited. The audience's response was enthusiastic. What has attracted these visitors? 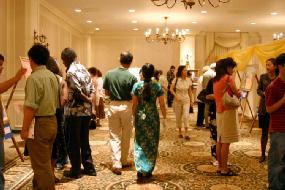 A glimpse of the art exhibit

In order to disseminate the universal truth and uphold justice, Falun Gong practitioners have faced hatred, devastation, even murder with great compassion and forbearance, and an uncompromising spirit. Each work has a deep meaning, and an unforgettable story behind it. The stories expressed by the works in the art exhibit are exceptional. Viewers are both moved and shocked, and they can clearly learn the truth about Falun Gong.

The "Truth-Compassion-Forbearance" Art Exhibit is composed of four parts: Assimilating to Dafa, Returning to One's Original, True Self; Life's Witness, Righteous Belief Exists Forever; Disseminating the Truth, Calling for Justice; and Good and Evil Will Receive Due Retribution and Justice. 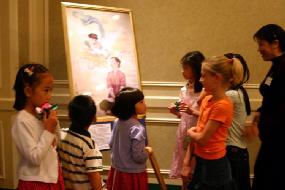 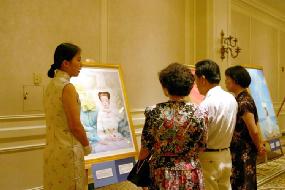 Telling the real stories behind the paintings

During the art exhibit, Falun Gong practitioners worked as guides, leading groups of visitors to each of the paintings, and explained the details of the story behind the painting. Most visitors followed the guides to view all the works from the first painting to the last one. While listening to the stories about Falun Gong expressed in the paintings, people experienced tremendous changes. 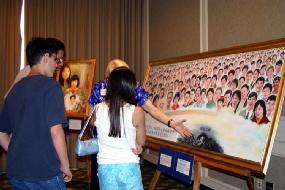 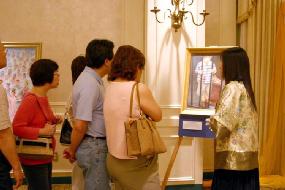 Half of the audience were Chinese people. Some of them had misunderstandings about Falun Gong, as they had been deceived by the slander and lies about Falun Gong that some overseas media reprinted from the media in Mainland China. After viewing the art exhibit, their incorrect concepts were eliminated, and they said that Falun Gong is great. 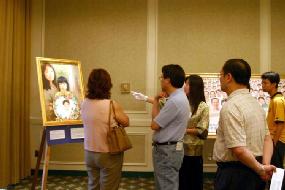 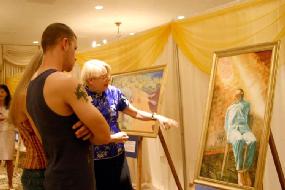 The painting entitled, "Persecution of Women" attracted the attention of many Chinese visitors. The painting depicts one of the hundred torture methods, the most brutal persecution imposed upon women by guards in labor camps and prisons, including as torture and sexual abuse. The content of the painting is a typical example of these tortures: an appalling incident of sexual assault happened in October 2000 that shocked the world. Perpetrators in the Masanjia Forced Labor Camp stripped 18 women Falun Gong practitioners naked and threw them into male cells. The brutality that ensued caused the death of several women practitioners, and all were mentally traumatized. Many of the practitioners who were illegally detained there told their relatives, "You can't imagine how atrocious, evil and wicked it is here." One practitioner who survived the atrocity, Ms. Xu Qingyan, exposed what happened to the public (Ms. Xu once was tortured to the verge of death at the Masanjia Forced Labor Camp. Afraid she might die in the camp, the labor camp authorities released her.) When a Western couple heard this story from a guide, they were shocked, and the tears kept streaming down their faces for a long time.

The painting entitled, "A Tragedy in China" tells the story of two practitioners, a young married couple. They were arrested and detained in prison for practicing Falun Gong. The guards attempted to brainwash them, instilling the slanderous propaganda into their minds and trying to force them to write a guarantee statement to renounce their belief. The couple refused to give up their belief. The husband tore up the guarantee statement and was tortured to death; his wife was extremely grieved for losing her loved one. The practitioner told the Chinese visitors, "Other than physical persecution, there is also spiritual persecution." A visitor was very sad and said, "I think the spiritual persecution is also very brutal, and not less painful than the persecution suffered physically."

Many Chinese visitors had questions while listening to the guides. A practitioner told them, "Let me explain a few things first, and then I can answer your questions." After viewing all the works and listening to all the explanations, some Chinese visitors said, "I've understood it all, no more questions." Only a few Chinese spectators walked around by themselves. A practitioner said to them, "Why not let me tell you the story in the painting." As a result, they followed the practitioner, and listened to one story after another, and learned the truth.

Some Chinese visitors whose minds have long been poisoned by the Chinese Communist regime's lies had their stubborn negative concepts melted one by one with these real stories. They were greatly touched and commented that Falun Gong is great.

A middle-aged Western man hurriedly came to view the art exhibit. When he saw the painting depicting the torture method, "Burning," where a torturer is using an electric iron to burn the body of a Falun Gong practitioner who is being hung up in the air, the middle-aged man was very angry, and said, "This is the most brutal torture in the world. How can a human being endure it? Humanity can't allow such an atrocity to exist."

"These paintings are wonderful"

During the two-day art exhibit, many visitors were local painters and artists. The "Truth-Compassion-Forbearance" art exhibit broadened their views, and touched their hearts. They had never seen this kind of art exhibit. One painter said, "The figures in the oil paintings are so lifelike and vivid. The paintings completely express the characters' thoughts and personalities. The technique is masterly. Though I'm also a painter, I can't reach this level. These paintings are wonderful." Another painter said, "These paintings are not at all ordinary paintings, they have deep meaning. We, ordinary painters can't express such meaning to this extent. These painters have a pure and noble state of mind." 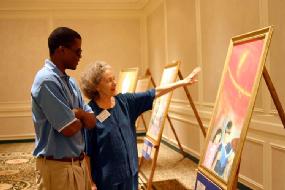 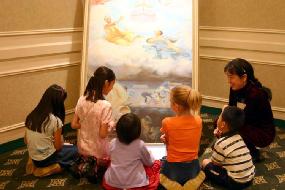 There were also many westerners among the visitors who were deeply attracted by these oil paintings. They saw the painting entitled "Why?" where a boy and his mother are locked in prison. The boy's eyes, which are bruised and show traces of blood, reveal his pain and bewilderment. The little boy's expression, the scene of his being locked in prison, made many men and women constantly wipe their tears while viewing this painting. They commented, "It is so vivid, it's just like a real story taking place in front of my eyes."

In another painting entitled, "Homeless" a little girl has just returned home from school. She is standing outside the door of her house, where there is a seal on the door put there by the 610 Office. Her parents have been arrested and taken away because they practice Falun Gong. The little girl has now become homeless. Tears are seen on her face. The viewers said, "The scene of this homeless little girl's tears touches our hearts. It is so vivid."

A Western practitioner who came from another area and had just started practicing not long ago volunteered to be a guide. She especially liked to introduce two paintings. One is "Assimilating to Dafa," created by a Western painter. She painted her grandson and granddaughter reading the book Zhuan Falun. They are encircled by a huge energy field. The little angels in heaven are also listening to the Fa. The other painting, "Pure Lotus," expresses a practitioner's pure and peaceful state while doing the exercises. Falun Gong is a cultivation practice of mind and body, in which practitioners follow the principles of Truth-Compassion-Forbearance and do five sets of slow and graceful exercises. After following this path, one will become more and more kind, compassionate and serene. This Western practitioner shared her happiness of practicing Falun Dafa with the audience.

An Indian man had been in the exhibition hall for a long time. He kept making phone calls on his cell phone. He asked practitioners, "When will the art exhibit be over?" Then he told practitioners, "I've finished viewing the 'Truth-Compassion-Forbearance' art exhibit, and I feel it's very good. I immediately called my family and friends to come to see the exhibit. I told them, don't miss this opportunity." Shortly after, his friends and relatives appeared at the exhibition hall.

A Chinese visitor hurriedly returned to the exhibition hall and took many informational materials. Before a practitioner could ask her, she spoke first while taking the materials. After this Chinese visitor saw the art exhibit, she felt that Falun Gong was very good, and she wanted to introduce it to her friends by sharing her happiness and showing the informational materials to her friends. Her friends read the materials and were also favorably impressed. As they were working and could not leave work at that time, they immediately asked their friend, "Please hurry up and go back to get some information for me. Don't miss the opportunity, otherwise, the materials will be all gone."

Among the visitors, some were members of various groups from different communities, and some were persons-in-charge of these groups. When a practitioner introduced the painting entitled, "The Battle in the Universe," one group leader said, "This reminds me of October 23, 2002. When Jiang came to visit in Houston, I read a report in the newspaper that many Falun Gong practitioners were peacefully appealing in front of the Intercontinental Hotel. Actually, I had been following reports on Falun Gong, so I've had many opportunities to learn about Falun Gong. I very much agree with Truth-Compassion-Forbearance, and I have the book Zhuan Falun. Next Tuesday, I'm going to start practicing Falun Gong."

Some visitors began practicing the five sets of the exercises immediately at the exhibition hall. Some inquired about local practice sites, while others said they would get more information from the Internet. Some visitors took many materials to share with their relatives and friends. The practitioners were so pleased to see the audience's active involvement.

A visitor finished viewing all the paintings and said, in tears, to the practitioners, "Two paintings entitled, 'Why?' and 'I Want My Dad,' make my mind uneasy. Little children are suffering in the persecution. They've lost their loved ones, and lost the warmth of their families. There are many such children. I've recently found a part-time job, and have some money at hand. I want to donate to rescue these children." Several more visitors shared the same feelings and wanted to provide a shelter for these children and rescue all children. Some visitors even asked practitioners about how they could help.

Indestructible as a diamond

Many Falun Gong practitioners actively participated in the preparation for this event. During the two-day art exhibit, practitioners from other cities in Texas, such as San Antonio, Dallas, Austin and even Chicago came to participate. The youngest practitioner is less than ten years old. The oldest is in his 70s. Some of them directed visitors to the exhibition entrance, some handed out materials, some worked as guides, and some sent forth righteous thoughts on the spot. Young practitioners made paper lotus flowers. Everyone made full use of his or her capabilities. Practitioners formed one body with the same wish: that people can learn the truth. The strength and power formed was as indestructible as a diamond.