(Clearwisdom.net) On May 22, 2005, the annual Canadian Tulip Festival entered its climax: the 53rd annual Tulip Boat Parade started from Dows Lake Park in west Ottawa. Canadian Members of Parliament and City Council Members attended the opening ceremony. Fifty-three boats from all kinds of groups, organizations and companies, decorated to their finest, sailed along the Rideau Canal for about 3 hours. Along the miles of shoreline, there were tens of thousands of spectators from everywhere in Canada and the world.

A practitioner described a few differences in this year's decorations from previous years. She said they came to the harbor at 9 o'clock in the morning to decorate the boat. On the front deck, they installed a large pink lotus flower so that a practitioner could sit in the center to demonstrate the meditation exercise (Falun Gong's fifth exercise). The sides of the boat were decorated with tulips and vases in different colors. During the parade, five practitioners demonstrated the Falun Gong exercises. Two practitioners in celestial maiden costumes greeted and waved to spectators from the front deck. The yellow balloons printed with "Falun Dafa" in both Chinese and English were very popular every year. This year, practitioners put even more yellow balloons on the top of the boat and along the sides. The red Falun Dafa banner with its yellow letters was very eye-catching. "This will let people see and feel the beauty of Falun Dafa," the practitioner said. 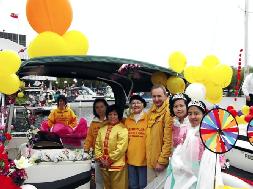 Ms. Gu from Mainland China participated in the event for the first time. She said she came to Canada as an international student and was very happy to join the celebration. "Though it was raining slightly, our boat received warm a welcome wherever we went. People waved to us, and some pressed their hands in the 'Heshi' gesture [both palms pressed together in front of the chest, a sign of greeting and respect] that expressed their interest in Falun Dafa. Some spectators imitated the exercise movements too, and waved to us. We are pleased to see so many people impressed by the beauty of Falun Dafa. We stood on the boat continuously for four hours but we didn't feel tired at all."

Later, Ms. Gu talked about her experiences and said that in China, many Chinese people were deceived by the communist party's propaganda and many others were so scared of the evil "implication policy" that they didn't dare contact any Falun Gong practitioner in public. It is therefore very difficult for them to hear the truth about Falun Dafa. Chinese people can only learn the truth of Dafa in small groups of people, when they go outside to a place not under surveillance. Comparing the situation in Canada to that of China, Ms. Gu said that the overseas countries have a much better environment for practicing Falun Gong. Outside of China, most people are not poisoned by the Communist Party. Public events like the Tulip Festival are good opportunities to let the world to know about Falun Dafa and to help them learn the truth in such a positive way.