(Clearwisdom.net) On April 12, the German newspaper The Main Post reported that what many people were most concerned about indeed happened: Phone calls from China said that Jiang Renzheng, who was deported to China from Wurzburg, was sentenced to three years in a forced labor camp. The only reason for his detention is that he participated in Falun Gong activities in Germany. 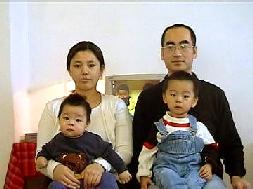 The report said, Jiang Renzheng and his wife Guo Rui were deported by Wurzburg authorities along with their two children on the 7th of March after their application for refugee status was rejected. Their lawyer could not reverse the deportation decision, although he filed an appeal to the Wurzburg Administrative Court.

Ms. Tang of the Falun Gong Association in Wurzburg was shocked by what happened to this family. Before the deportation decision, she reminded the court about the severity of the persecution against Falun Gong in China. Jiang Renzheng began practicing Falun Gong in Germany and expressed his intention of not giving up the practice. After the deportation, Ms. Tang kept contact with the Jiang family and told The Main Post about the misfortune of this family. When they arrived at an airport in China their passports were confiscated by the Chinese authorities and their personal details were noted.

Two weeks later, Jiang Renzheng was summoned by the bureau of national security. He was pressured many times during the interrogation to withdraw from Falun Gong. According to Ms. Tang's account, Jiang's father was summoned during the interrogation to help force his son to recant. However, Jiang expressed his determination to the people at the bureau of national security that he would not sign [any paper denouncing Falun Gong] even if they killed him.

On the 8th of April, a big change happened in the Jiang family. Jiang Renzheng was taken away by five policemen and put into a forced labor camp in Benxi. According to the bureau of national security, Jiang was sentenced to three years in the labor camp because he participated in Falun Gong activities.