Falun Dafa is an ancient Chinese exercise to improve the body, mind, and spirit consisting of exercise, meditation and teachings that are rooted in the Chinese culture; and

Falun Dafa, publicly introduced in 1992, is now practiced by more than 100 million people in more than 60 countries;

I, Ross Priest, Mayor of the City of Cranbrook, do hereby proclaim May, 2005 as

Ross Priest (signature)
Mayor
Dated this 9th Day of May, 2005 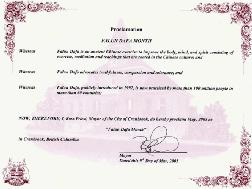