(Clearwisdom.net) In 1996, Falun Gong was registered in Singapore under the name of "Falun Buddhist Association at Singapore". The registration has been renewed several times since.

Before the persecution began in July 1999, in the island-state of Singapore, there were several dozen practice sites located in residential areas, public parks, beaches and at the MacRitchie Reservoir. The outdoor exercise practice had never been under surveillance or investigated by the police. At these practice sites, practitioners often provided free exercise instruction to the public. They were allowed to hang banners that read, "The great cultivation law of Falun Dafa, free instruction" and hand out introductory materials free of charge. All of these activities, including practice by groups of several hundred people, did not need the authorities' approval or permission. This open environment continued until July 1999 when the Chinese Communist regime (CCP) officially started persecuting Falun Gong.

The environment has completely changed since the persecution began. The local Singapore media reprinted a large amount of the CCP's deceptive propaganda about Falun Gong. Many people were seriously misled by the propaganda. Thereafter, when practitioners practiced the exercises outdoors, they were often reported to the police. After receiving the reports, police went to the practice sites a number of times to investigate, watching practitioners, and in turn, making the public somewhat fearful of Falun Gong. Large-scale group practices were often visited by police vans and watched by plainclothes officers. Permits for group practices contained plenty of restrictions. For instance, practitioners were often not allowed to hand out flyers or to exhibit any banners. The following are three examples. 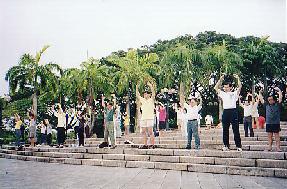 One day in mid-2000, at about 8 a.m., when Ms. An was practicing the Falun Gong exercises near Blk. 926, Jurong West Street 91, two police officers arrived and rudely told her that she should not practice there and had to immediately leave. Ms. An told the two officers that she had been practicing the exercises there for more than two years. She said that she was willing to go with them to the police department and check whether Falun Gong was legal in Singapore. The officers did not want to listen to her explanation and persistently demanded that she leave. They warned her that if she didn't leave, she would be charged and have to appear in court. Ms. An had no choice but to leave. She later went to the police department to clarify the truth. The officers on duty did not know whether Falun Gong was legal in Singapore or not. The officer made a few phone calls and listened to her explanation and finally learned that Falun Gong was legally registered in Singapore.

Esplande Park is a well-known tourist attraction in Singapore. For a long period of time, practitioners went there to practice the exercises and hand out truth-clarifying material to tourists from all over the world, especially those from Mainland China.

One afternoon in mid-2002, four practitioners including Jiang Lihua and Wang Zongbin (who was 80 years old and held a long-term visa), Song Ren (a graduate student from National University of Singapore) and Ms. Qiu (a permanent resident in Singapore) went to Esplande Park to practice Falun Gong and clarified the truth to Chinese tourists. Several police officers came and cross-examined them. The officers asked them to present their identification cards. Jiang Lihua, Wang Zongbin and Song Ren did not have their ID cards with them, so they politely explained their status to the police. However, the police officers were very rude and insisted on checking their ID cards. They said that they suspected that they lived in Singapore illegally. The officers ignored the fact that two of the practitioners were in their 80's and forced them all to go to the Central Police Office, detaining them until their family members brought their ID cards to the police office. 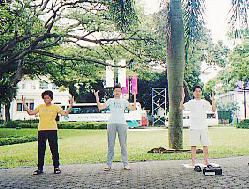 Case III. Threats of legal action against practitioners who held a peaceful appeal

While waiting, they started practicing the Falun Gong exercises outside the Embassy. Shortly after, police came and recorded their ID numbers. In September the same year, they were summoned to the police bureau for further investigation. In the end, they all received serious warnings from the police who told them that they would face charges in court if they do it again. 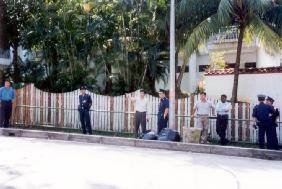 Picture 3: This is the former site of the Chinese Embassy where the 15 Falun Gong practitioners in Singapore held a peaceful appeal. Several police officers watched practitioners outside the fence.