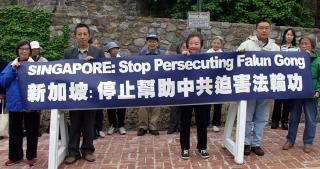 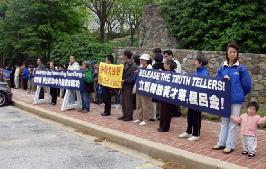 It is reported that two Falun Gong practitioners, Ms. Ng Chye Huay and Ms. Cheng Lujin were charged with ""Assembly without a Permit" and "Possession and Distribution of VCDs without a Certificate" and six other charges in May 2004. After nearly one-year trial, on April 27, 2005, the Singapore court convicted the two practitioners. Ms. Ng was fined 24, 000 Singapore dollars, while Ms. Cheng was fined 20,000 Singapore dollars (1 Singapore dollar is about 0.61 US dollar). The two practitioners refused to accept the verdict and expressed that they would file an appeal. They were taken to the Changi Women's Prison at 6:00p.m the same evening, where they may be jailed for at most 24 weeks. Ms. Cheng has a six-month-old baby who needs to be taken care of, but her request to have her baby with her was turned down by the Singapore police. Ms. Cheng Lujin went on a hunger strike in jail to protest the court's incorrect verdict.

The shadow laid by the Chinese Communist regime on Singapore

This verdict delivered by the Singapore court is not the only one unjust treatment toward Falun Gong practitioners by its government. Ms. Zhen Hanfei who spent four years in Singapore as a student detailed her own experiences and other Singapore Falun Gong practitioners' experiences that she was aware of. She stated, "The Singapore Falun Dafa Association was officially established and registered in 1996. Therefore, Falun Gong is legal in Singapore. Before the Chinese communist regime started persecuting Falun Gong, it was quite free for practitioners to hold activities. They were free to hold group practice, experience sharing conferences and 9-day lecture series to feature Master Li's lecture videos. Practitioners did not need to apply for any permit to hold these activities. After the Chinese communist regime began persecuting Falun Gong, things have changed. Many activities have been restricted. Practitioners are not allowed to hold the 9-day lecture series at the original place. It is okay for them to apply to practice the Falun Gong exercises, but if they want to hold activities to expose the persecution and clarify the truth, they encounter tremendous resistance and usually, they do not obtain the permission."

"However, the Singaporeans are also victims of this persecution" said Ms. Zhen. "After the Chinese regime began suppressing Falun Gong in 1999, Singaporean media reprinted a large amount of deceptive propaganda against Falun Gong from the Chinese state-owned media. The reprinted propaganda usually occupied several pages, on which many bloody photos used by the Chinese regime to defame Falun Gong were posted. These kinds of articles had been reprinted for two to three years in Singapore. As a consequence, lots of Singaporean people were misled and thought that Falun Gong was like what the Chinese Communist regime described. Some people even mistakenly believed that Falun Gong practitioners condoned murder or suicide, and even that Falun Gong was illegal in Singapore, and so on. Falun Gong practitioners have thus frequently encountered discrimination. When they practiced the exercises outside, someone would report to the police. Then the police came and recorded each practitioner's identification number. As a result, many practitioners received unfair treatment during the process of applying for permanent residency or extension of their work visa or student visa."

Ms. Zhen said, "Some Falun Gong practitioners could not obtain their permanent resident card even five or six years after they married to Singaporeans. But in normal cases, one could get his permanent resident status in several months. One practitioner who is my close friend went to the Immigration Office to extend his student visa. Normally, it takes one week to get a two-year extension. But he was required to renew his visa every other week and it lasted for more than one year. I, myself was also requested to renew my visa every month until I obtained my degree."

Ms. Zhen was also threatened by the police for carrying Falun Gong truth-clarifying Video CDs. She said, "There was one time, two fellow practitioners and I went to a subway station to do survey on Falun Gong. We were reported to the police. The police officers came and searched my bag, in which they found Falun Gong truth-clarifying Video CDs. The officers claimed that the VCDs were not authorized and it was illegal to carry them. Later, the police station sent me a warning letter and informed the Immigration Office. Shortly after, the Immigration Office sent me another letter warning me that my student visa would be canceled if I'm found to do the same thing again."

Does the persecution in China really have nothing to do with Singapore?

But is the judge's statement really true?

"After the tsunami occurred in Southern Asia, the Singapore government and people offered their effort to help those victims in the disaster. From this, one can see that Singapore really cares about the safety of other countries' people. Among Singaporean people, quite some have family members or friends in China who are suffering the suppression due to their practice of Falun Gong. How could the judge claim that the persecution in China has nothing to do with this case?" said Mr. Ding, "It is because of the pressure exerted by the Chinese Communist regime."

At about 2 p.m., First Secretary Mr. Chivy Li and another official from the Singapore Embassy in Washington DC met with Mr. Ding, representative of Falun Gong practitioners. Mr. Ding said that the two officials had been very nervous all the time. They did not allow any media people to enter the Embassy from the very beginning. They only allowed one person to go in the Embassy and repeatedly asked him whether he carried a camera and was recording the conversation. 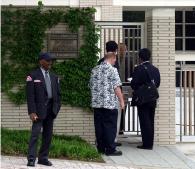 Falun Gong practitioners requesting to meet with officials in the Embassy

The Singapore Embassy received copies of all of the letters read out in the press conference, and representatives promised to deliver the letters back to their country. They also asked twice how long the appeal would last. Mr. Ding said, "Until the problem is resolved."

Mr. Ding said, "Through practitioners' effort over the past six years to clarify the truth about Falun Gong to governments and people across the world, international society has learned about Falun Gong. More than 1,000 proclamations have been issued to honor Falun Gong. Most countries condemn the persecution of Falun Gong in China. Last November, the Epoch Times published the "Nine Commentaries on the Communist Party" and numerous Chinese people have awakened. More than 1.2 million people have published statements withdrawing from the CCP. It is really not wise for the Singapore government to make the choice to imprison Falun Gong practitioners. When people in the future look back at this page of history, Singapore will feel extreme regret for what they have chosen."

"At present, the entire world is concerned about Ms. Ng and Ms. Cheng's future. We sincerely hope that Singapore government reconsiders the case and makes a correct choice between upholding justice and assisting the evildoers to do evil, so that it will have no qualms to the future generations of the Singaporean people," said Mr. Ding.