Recognition of the Positive Influence of Falun Dafa, by the Metropolitan Government of Nashville and Davidson County, Tennessee [May 13, 2005]

: Falun Dafa, also known as Falun Gong, is a very peaceful and healthy practice of body and mind which emphasizes the assimilation of the universal principles of "Truthfulness-Compassion-Forbearance"; and

; Falun Dafa has benefited our society as well as over 100 million people, in more than 60 countries since its public introduction in May 1992, and Falun Dafa's contribution has been widely recognized and honored around the world; and

: Falun Dafa transcends cultural and racial boundaries, resonates the universal truth to the whole world, and bridges the gap between east and west; and

: The great compassion and tolerance demonstrated by Falun Dafa practitioners under the most severe environment has touched the hearts of every kind-hearted human being.

, I Bill Purcell, Mayor of the Metropolitan government of Nashville and Davidson County, do hereby recognize the positive influences of Falun Dafa in Nashville. 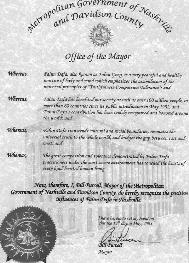 “Canada: Mayor of the City of Duncan Proclaims May 2005 as Falun Dafa Month Honoring Truthfulness-Compassion-Forbearance [May, 2005]”