Canada: Mayor of the District of Highlands Proclaims May 2005 as Falun Dafa Month Honoring Truthfulness-Compassion-Forbearance [April 22, 2005]

, The universal principles of Falun Dafa-"Truthfulness-Benevolence-Forbearance" -are supported by kind-hearted people around the world and have helped hundreds of Canadians improve the quality of their lives;

, Falun Dafa promotes the cultivation of body, mind, and spirit through these principles, gentle exercises and mediation, bringing its practitioners better health and higher moral standards since it was brought to the public in 1992 by Mr. Li Hongzhi;

, Falun Dafa practitioners worldwide are joyously celebrating the 13th Anniversary of Falun Dafa's introduction to he public on May 13, 2005, and will hold celebrations and festivities across Canada;

, transcending the racial and cultural boundaries, Falun Dafa embraces people of all ages, from all walks of life and religious affiliation, and is practiced by over 100 million people in over 60 countries around the world;

, I, Karel Roessingh, Mayor of the District of Highlands do hereby proclaim May, 2005 as "Falun Dafa Month Honoring Truthfulness-Compassion-Forbearance". 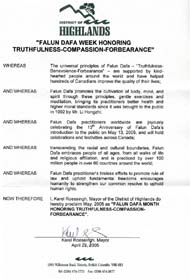