Proclamation of Falun Dafa Day, City of Huntsville, Alabama [May 13, 2005]

, the practice of Falun Dafa is based on the principle of Truthfulness-Compassion-Tolerance; and

, 97.9 percent of more than 10,000 practitioners in China experienced noticeable health benefits after practicing Falun Dafa, and

, study by researchers in Baylor College of Medicine in Houston found that Falun has positive effects on immune resistance to virus; and

, Falun Dafa has received over 1000 proclamations and awards from different countries, dozens of states, hundreds of cities, and all levels of government;

in the city of Huntsville, Alabama.

, I have hereunto set my hand and caused the Seal of the City of Huntsville to be affixed this 13th day of May, 2005,

Mayor of the City of Huntsville, Alabama. 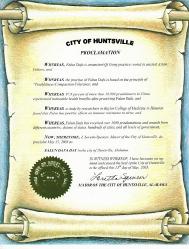 “Teaching the Fa at the 2005 Manhattan International Fa Conference”