On Sunday May 8, Mothers' Day, Falun Gong practitioners in Taipei conducted activities to celebrate May 13, World Falun Dafa Day. Practitioners invited their mothers, other family members and friends to join them to enjoy beautiful flowers and new greenery at the Shilin Presidential Residence.

It was rare that cool breezes were blowing during the usually hot May weather in Taipei. At the Shilin Presidential Residence, the mountain is green and the water is clear, with birds singing and the air scented with the fragrance of flowers. The scenery is quite beautiful. After 9 a.m., hundreds of tourists flooded into the Shilin Presidential Residence. Practitioners set up stands to serve fruits, tea, and ice water free of charge to tourists. In addition, several media outlets also joined the activity to congratulate the Falun Gong practitioners' festival ¡V World Falun Dafa Day.

Painting from nature was the activity that children enjoyed most. A good number of young children carried their drawing boards and paper and chose a pretty place to draw from the scenery. In their paintings, one could see the spinning Falun emblems, balloons imprinted with words, "Truthfulness-Compassion-Forbearance." Some wrote, "Falun Dafa is great!" 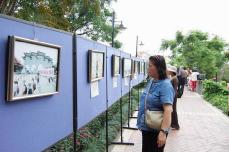 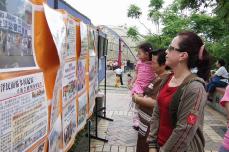 Practitioners also held a "Journey of Falun Dafa" poster exhibit on one side of the pavement. Several dozen historic photos depicting the worldwide spread of Falun Dafa were displayed. The photos showed scenes, including grand character-forming by more than 10,000 practitioners and peaceful exercise demonstration. Each photo attracted people's attention.

At about 11 a.m., it stopped drizzling and the sky became clear and sunny. Numerous tourists were moved by the practitioners' warm hearts and the festive atmosphere of Falun Dafa Day. They stopped to watch and enjoy the musical performances, including the New Tang Dynasty Drum Troupe's "Majestic Thunder," a performance on violin, Zheng (a traditional Chinese instrument), flute, Erhu (a two-string traditional Chinese instrument) and lute, practitioners' solos and chorus, a performance by the "little red cap" drum troupe, and the Minghui kindergarten band and waist drum troupe. 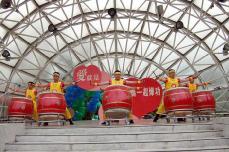 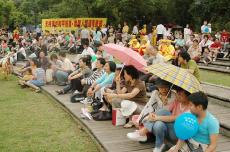 The New Tang Dynasty Drum Troupe's "Majestic Thunder" opened the concert. The practitioners' ensemble of instruments was soft and melodious. Each solo and choral performance was very touching. The little practitioners' innocent and lovely performance won rounds of applauses from the audience. The waist drum troupe, in traditional costume, brought people something fresh and new. Many practitioners' family members and friends were aware that the performers are Dafa practitioners who are students or teachers from prestigious universities or high schools, professional musicians or housewives. These practitioners used their spare time to practice for the performance. People were all amazed by the practitioners' talents and their effort to promote Dafa.

The performance in the afternoon attracted even more people, and even the steps of the stage were crowded with audience members. The performance concluded with a chorus by all performers, "Falun Dafa is Good." Guests in the audience also joined the chorus.

Although many people had not known about Falun Gong before, the practitioners' kind, amiable and modest attitude and demeanor left them with a very positive impression. They therefore also joined the chorus. In the end, the practitioners demonstrated the five sets of Falun Gong exercises and concluded the celebration as a beautiful evening set in. 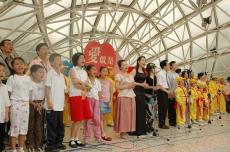 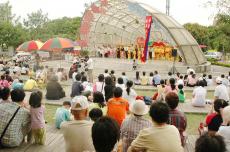 Performers and audience singing together, "Falun Dafa is Good"

On Mothers' Day, mothers who practice Falun Gong are able to celebrate the warm holiday with family members. Unfortunately, in Mainland China, countless mothers who practice Falun Gong are suffering from the inhuman persecution. They are either imprisoned, tortured, or forced to leave home and become destitute to avoid being detained. They are unable to reunite with their family members. Nevertheless, under the situation that Dafa practitioners from all over the world and governments of many countries send out their voice of justice to suffocate the evil, we believe that the evil persecution doesn't have much longer to maintain its feeble existence. The day when all mothers are able to freely practice Falun Gong will come soon!

“Letting Go of Attachments and Quitting the Evil Communist Regime”