Montreal: The Canadian People Celebrate May 13 Together (Photos)

(Clearwisdom.net) The weather was pleasant on May 7, 2005 in Montreal after a cold winter and rainy spring. A constant stream of people came and went in Chinatown. Here, with police officers clearing the way, a procession accompanied by the sound of waist drums and music could be seen on the streets of Chinatown. Shoppers, store owners and passersby automatically stood on the two sides of the street and watched the parade. Later, they followed the procession to Zhongshan Park in Chinatown. Suddenly, the park was swarming with people and it was quite bustling and joyful. Falun Gong practitioners from Montreal and Ottawa were celebrating World Falun Dafa Day together.

Regardless of Pressure from the CCP, German Police Allow a "Bring Jiang Zemin to Justice" Banner Outside the Chinese Consulate in Munich (Photo)

(Clearwisdom.net) On April 25, 2005, Munich Falun Dafa practitioners appealed outside the Chinese Consulate to commemorate the sixth anniversary of the "April 25" peaceful appeal by Falun Gong practitioners. 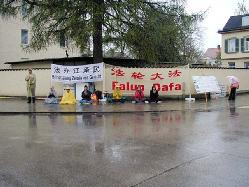 While practitioners were peacefully appealing in front of the consulate, a consulate staff member purposely concealed himself in the crowd queuing up at the consulate to disguise his identity. He stood in the queue for a while and then went to talk to a German police officer standing outside the Consulate. After returning to his position in the queue, he stayed there for less than two minutes before scurrying off in a rush.

(Clearwisdom.net) On the afternoon of April 24, 2005, the General Association of Armenian Descendants in France held a rally at Place du Canada, Paris to celebrate the 60th anniversary of the liberation from Nazi concentration camps and commemorate the 90th anniversary of the holocaust of Armenians in Turkey. Around 18,000 people participated in the rally. The association invited the chairman and representatives of French political parties, and public figures from mainstream society. Mr. Hanlong Tang, Chairman of the French Falun Gong Association, was also invited to attend the rally.