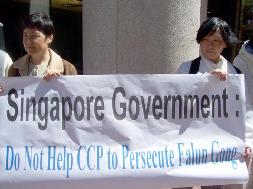 It was reported that two Falun Gong practitioners, Ms. Ng Chye Huay and Ms. Cheng Lujin, were charged by the police in May 2004. Each of them faced eight charges, including "Assembly without a permit" and "Possessing and mailing out uncertified VCDs." After almost one year of hearings, the two practitioners were fined S$20,000 and S$24,000 respectively on April 27, 2005 by the Singapore Court. They refused to accept the verdict and expressed their wish to appeal. The two practitioners were taken to the Changi Women's Prison at 6:00 p.m., facing possible imprisonment of up to 24 weeks.

Practitioner Ms. Chen Zhao handed over the letter to the Singapore Consulate on April 29. She said that she has paid much attention to the incident because Singapore was the only country in the world except China to fine and imprison Falun Gong practitioners. The Singapore Court claimed it delivered the verdict based on Singapore's law. But the verdict actually violated Singapore's Constitution on freedom of speech and gathering. Ms. Chen said, "The law must safeguard justice and kindness and inhibit evil in society. We call for the Singapore government to immediately withdraw the incorrect verdict."

The letter to the consulate stated that Falun Gong practitioners follow Truth, Compassion, and Tolerance and are law-abiding, good citizens. The true criminals are the CCP, who persecute and kill many kind-hearted people for their belief. Every Falun Gong practitioner is endowed with the right to explain the facts to the world's people.

Falun Gong spokesperson Zhang Xuerong of San Francisco said that she was surprised at the verdict. Ms. Zhang said, "This incident is significant. If during World War II the Jews had distributed flyers in Singapore to call for an end of the genocide, would they have been arrested? If a gangster were using violence and killing people and someone called for help, would we be upset that his voice was too loud? This is a major issue of principles in safeguarding justice or helping evil."

Ms. Zhang pointed out, "The CCP regime's persecution of Falun Gong has lasted for six years. During the last six years, mainstream countries have issued resolutions to condemn the CCP's atrocities. Falun Gong practitioners explain the facts to the world's people out of kindness."

Falun Gong practitioners explained the facts of Falun Gong and the persecution to the Singapore police, who turned around and charged the practitioners. The Singapore Court used the law as an excuse to punish them, helping to persecute good people.