Some Thoughts on the 200,000 "Solemn Declarations" Published on the Minghui Website

It has been six years since Jiang Zemin's regime started brutally persecuting Falun Gong practitioners using all of China's resources. On April 7, 2005, the number of "solemn declarations" published on the Minghui website reached 206,406. (Minghui is the Chinese version of Clearwisdom.net) This is not just a large number; it is evidence of the enduring conscience of the people, and the public's spurning of the evil regime. Moreover, the number of people publicizing their "solemn declarations" continues to increase drastically. It is predicted that more and more cultivators will come forward to resist the persecution, and truly become upright, dignified, and enlightened beings.

People publicizing their "solemn declarations" range from elementary students to university students, from illiterate older women to university professors, from poor citizens to high-ranking government officials, from unemployed laborers to students returning from studying abroad. They speak out with a unified voice, solemnly declaring that the "will not practice again" statement they signed against their will, under extreme pressure, is no longer valid, and that they will continue to practice Falun Gong, follow the principles of "Truthfulness-Compassion-Forbearance," and practice cultivation in a dignified way. 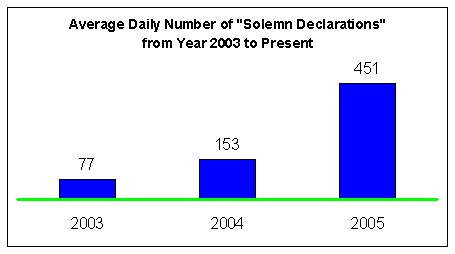 If calculated from data received since February 2005, the monthly data reveals that the average daily number of "solemn declarations" was 139 in February, 785 in March, and 1476 in April. 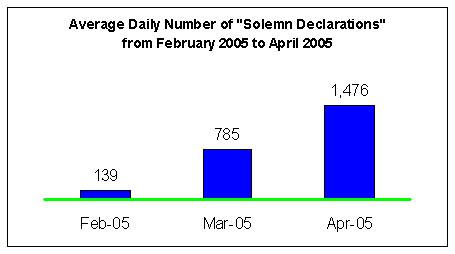 Obviously, more and more people have come to understand the true evil nature of the persecution, and they outright reject any forms of the persecution. The "solemn declarations" have spread to every corner of Chinese society. These are not only declarations of lives re-affirming "Truthfulness-Compassion-Forbearance," but also a concise response to the evil that attempts, using all means, to suppress the original nature of life.

If it were not for the inhuman persecution of Falun Gong by Jiang's regime, the two-hundred-thousand-plus practitioners would never have been forced to make the so-called "promises" against their wills. They would not have had to experience the painful torture and shake off the horror created by the evil, nor would they have had to write these solemn declarations.

Over the six years of persecution, we do not know how many practitioners were actually subjected to imposed penance against their will. Nonetheless, looking at the two-hundred-thousand-plus solemn declarations, and the recent drastic increase in the average daily number of people making declarations, we wonder how many kind-hearted people were tormented by this brutal persecution.

Every so-called promise and determination to not practice involved harassment, confiscation of one's property, fines, brainwashing, torture and so on. Massive amounts of manpower and physical resources have been used to achieve this. Police, judicial, legal and administrative organs, as well as families were involved. Can we imagine how much this has cost China? Is the return from such massive national resource expenditures merely those continuous solemn declarations?

Between December 4, 2004, and April 7, 2005, over 710,000 people publicly renounced their Chinese Communist Party (CCP) membership and withdrew from other CCP organizations such as the Communist Youth League and Communist Young Pioneers. The number is increasing exponentially. Estimating from February 2005, the monthly data reveals that the average daily number of people who publicly renounced their party membership is respectively 2,501, 16,348 and 19,259. It is evident that people are gradually recognizing the CCP's evil nature. 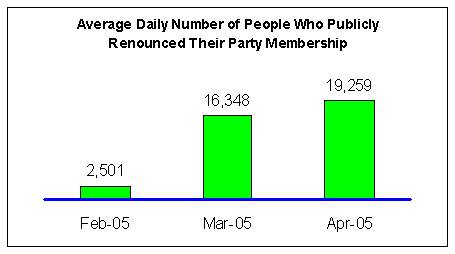 Taking into account the CCP's Internet blockade and the long-term atmosphere of terror created by the CCP, it would be difficult to estimate the total number of people who have recognized the true nature of the CCP, and intend to quit or are willing to quit the party.

After enduring the brutal persecution, practitioners have further recognized the preciousness of Dafa. They will no longer be moved by the persecution, and will firmly cultivate "Truthfulness-Compassion-Forbearance." There are also many people who were deceived by the CCP, but recognizing its evilness, overcame their fear and quit the party, thus avoiding the fate that awaits any evil that persecutes kindness.