Sponsored by the Mid-US Falun Dafa Association, the "Uncompromising Courage" Art Exhibit was held from April 4 to April 8, 2005 in the lobby of the James R. Thompson Center, an Illinois State government building in downtown Chicago. The Thompson Center is among the most famous buildings of downtown Chicago. This 17-story building houses over 70 state agencies and offices, and draws at least 5,000 visitors daily. Over 30 works from the art exhibit were prominently displayed along an arc in the center of the Thompson Center's lobby. The 32 paintings were created by 15 Falun Gong practitioners who are artists, primarily using the technique of Western oil paintings. The art exhibit was divided into four themes: 1) Heaven and the human world, the beauty of cultivation practice; 2) Uncompromising courage; 3) Spreading the truth and calling for justice; and 4) Justice will ultimately triumph. The art exhibit displayed the process of Falun Gong's wide dissemination, as well as the current persecution and practitioners' perseverance in resisting the persecution.

Representative Liu Tong from the Mid-US Falun Dafa Association expressed that these paintings are not only artistic works, but they also reflect the battle between righteousness and evil as played out in the persecution of Falun Gong practitioners in Mainland China. He said that these works were created based on true stories, including some of the artists' personal experience of being illegally detained in Mainland China, such as professor Zhang Kunlun. 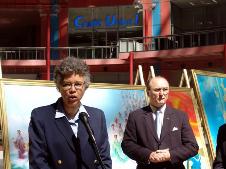 The opening ceremony officially began at noon. At the press conference, 4th Ward Alderman Toni Preckwinkle and Cook County Commissioner (16th District) Anthony Peraica came to take part in the ribbon cutting ceremony. Toni Preckwinkle said that as an African American, she knew deeply the preciousness of freedom and equality. She also felt that we should show concern over inequalities happening in other places, especially the persecution of Falun Gong in China. In 2002, Ms. Preckwinkle initiated a resolution supporting Falun Gong and condemning the persecution. The resolution was unanimously passed by the Chicago City Council on November 6, 2002. Mr. Peraica said that despite economic trade between China and America, democracy and human rights in Mainland China have not improved. He hoped that democracy, freedom and human rights would not be inundated by the big tide of economic concerns. 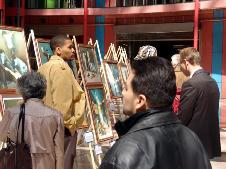 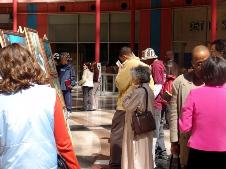 As the Thompson Center is located in the center of Chicago, it receives thousands of office workers and visitors daily. Upon entering the lobby, people are immediately attracted by the solemn and peaceful exhibit, and most of them stop and view the paintings carefully. Many people were amazed at the first painting, entitled, "The Pledge." This painting describes the story of Falun Dafa disciples coming down from Heaven to the human world to fulfill their pledge and mission. Dafa disciples in the painting include all human races. They are shown in various styles of dress and have a solemn and steadfast demeanor. Though the audience may not completely understand the meaning of the painting, all the people passing by exclaimed, "Beautiful! Spectacular!" Many people inquired about the price and wanted to buy the painting.

People view the art exhibit and learn about the truth

Eight paintings depicting torture methods caught peoples' attention. The torture methods shown included force-feeding, the tiger bench, hammering bamboo spikes into fingers, injection with unknown substances, and beating. The audience stopped in front of these paintings for the longest period of time, and raised many questions. They paid great attention to the stories behind the paintings. Many people felt that it was inconceivable that such cruel torture could be happening in the modern 21st Century. Ms. Xu, who was in charge of explaining the content of the paintings, told the audience that they all showed true stories, actual events that had happened to her friends. An organizer of a youth association listened to Ms. Xu's explanation and told her that she felt the art exhibit was very meaningful. There happened to be several young people' groups coming to visit the Thompson Center the next day, so the youth association organizer requested that the practitioners introduce Falun Gong and the persecution in China to these young people. At 5:00 p.m. when work was over for the day, there were still many people walking out of the building and nodding in approval to the practitioners. They thanked the practitioners for bringing them such a beautiful art exhibit.

The "Uncompromising Courage" Art Exhibit has been displayed in major cities throughout the world, including Geneva, Sydney, Jakarta, Washington DC, New York and Boston, and cities in Taiwan, Korea, and Canada. This was the first time that the paintings were shown in Chicago. Later, the art exhibit will tour other cities in the mid-US area.