(Clearwisdom.net) Two Falun Gong practitioners, Mdm Ng Chye Huay and Mdm Cheng Lu Jin, were charged with "Assembly without a Permit" and "Possession and Distribution of VCDs without a Certificate" and six other charges in May 2004.á These charges stem from their introducing Falun Gong and the brutal persecution happening in China to the public on February 23, 2003 at Esplanade Park. After nearly one year of procedures, on April 27, 2005, a Singapore court delivered an unjust verdict against Mdm Ng and Mdm Cheng. They were ordered to pay fines of á20,000 and 24,000 Singapore dollars respectively. The two practitioners refused to accept the verdict, and requested to appeal. They were then taken to Changi Women's Prison at 6:00 p.m. the same evening, where they may be jailed for at most 24 weeks.

This verdict is evidence that the Singapore government has chosen to be an accomplice of the Chinese communist party to persecute Falun Gong practitioners, and it sets a bad precedent in the world. Falun Gong practitioners around the world will immediately take various means to clarify the truth, call for the Singapore government to stop participating in the persecution, and not to be the CCP's scapegoat prior to the collapse of the CCP.á 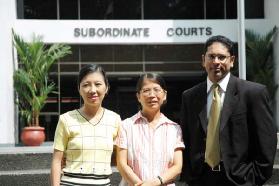 Regarding the judge's verdict, Dr. Wang Yuyi of the Falun Buddha Society (Singapore) expressed that the two practitioners refused to pay the fines because they thought the judge's verdict was unfair. The judge unreasonably refused the defense counsel's defense that was based on the constitution and human rights, and also disregarded the fact that the prosecutor was unable to provide effective evidence regarding several charges, and insisted on a harsh verdict against the two Falun Gong practitioners. This is objectively participating in the persecution of Falun Gong practitioners.

Cause of the case

Since Jiang Zemin started the persecution campaign against Falun Gong on July 20, 1999, some Falun Gong practitioners in Singapore have been spontaneously going to Esplanade Park to do group exercises and clarify the facts about Falun Gong to tourists and the local people. Practitioner Mr. Cai who is retired and often goes to the park in the afternoon every day told the reporter that China's Jiang Zemin and his faction have fabricated a lot of lies to facilitate the persecution of Falun Gong. He saw the media seriously misleading the public, so he decided to go there to practice the exercises and tell the Chinese people he met the facts about Falun Gong.

Mr. Cai said, "Both Mdm Ng and Mdm Cheng are housewives. I often saw them bringing their children here to practice the exercises. I remember once I met a group of Chinese police who participated in the persecution of Falun Gong. After they had a conversation with Mdm Ng, they felt regret about their behavior before, and expressed that they would no longer do those immoral things when they went back."

Another Falun Gong practitioner told the reporter that sometimes officers from the Central Police Division Headquarters ("CPDHQ") received reports from the public and would come to the park, and we would tell them why we practice the exercises here and about the persecution happening in China. The police often let us collect the display materials on the ground, and they would leave after we finished practicing the exercises. Later, some police officers told us that they had learned about what is happening in China and they came only as part of their routine.

On February 23, 2003, Mdm Ng and Mdm Cheng went to Esplanade Park as usual to practice the exercises. That day, two to three plainclothes police officers came over and took a look at the truth clarification materials on the ground, and then ordered the practitioners to collect all of the materials in five minutes and then leave. Mdm Ng and Mdm Cheng clarified the facts to these officers, and hoped that they would not do this. Forty minutes later, the head of the plainclothes officers was very angry and lifted up the cloth on the ground where the materials were displayed, and ordered all seven practitioners to give their IC details. He said, "You don't have a permit, it's illegal. I'll charge you all in court!"

One year later, in April 2004, Singapore police ordered the 7 practitioners whose IC particulars were recorded to go to CPDHQ. Among them, 5 received warnings, while Ng Chye Huay and Cheng Lujin were accused of 8 unfounded charges including "Assembly without a Permit" and "Possessing and distributing uncensored VCDs." Reportedly, the two practitioners mailed Falun Gong truth-clarifying VCDs to the director and deputy director of the CPDHQ earlier. The main content of the VCDs was "The Truth of the Tiananmen Self-Immolation."

During an interview with the reporter, Mdm Ng explained why she mailed the VCDs to the police.

She said, "We have been practicing Falun Gong and clarifying the truth in Esplanade Park for many years. After learning the truth, people with a sense of justice often asked us how they could help us end this inhumane atrocity in China. I mailed VCDs to the police in the hope that the police would learn more about the persecution. However, I never expected that the police would charge me for doing so."

Mdm Ng said, "The persecution has lasted for 6 years, and the reason that the persecution can continue is just because many kind-hearted people have been deceived by the Chinese Communist Party and Jiang's regime. What I have been doing is just to let more people hear the truth and to awaken their conscience so that they can extend their hands to practitioners to end this atrocity. Other practitioners in more than 60 countries are doing the same thing."

"In the past 6 years, we have given the Singapore Police countless truth-clarifying materials and they should know the truth already. In fact, the CPDHQ doesn't deny this fact, and some of them even thanked us for helping them know the truth," Huay said.

Since the beginning of the lawsuit, practitioners in Singapore and Falun Buddha Society (Singapore) have restated their innocence to related institutions and asked Singapore Police to withdraw the lawsuit. The Singapore Police said that it could reduce charges against practitioners from 8 to 2 items if practitioners pleaded guilty. Practitioners refused to do so because they firmly believe that clarifying the truth is a good deed and didn't violate any laws or harm any public interest. In the end, the case was brought to court.

The practitioners' lawyer, attorney Alfred Dodwell, told the reporter, "For a criminal lawsuit, the prosecutor is responsible to prove the charges are valid based on collected evidence. However, I have to say that the prosecutor failed on this very point."á

Regarding that the prosecutor couldn't provide effective evidence, Dr. Wang gave one example:

Singapore Police charged Ng Chye Huay for "possessing 12 uncensored VCDs" on November 23, 2002. However, there are many loopholes in the evidence provided:

2) Claiming there were two police officers on duty during the incident while only one reported to the court;

6) As police officers couldn't provide effective evidence during the court hearing, the Singapore police then used practitioner Ng Chye Huay's affidavit recorded in CPDHQ on November 30, 2002 to support their charge; however, the affidavit didn't mention the incident on November 23, 2002 at all.

Dr. Wang said, "The judge unreasonably turned down the defendant's attorney's plea which was based on the Singapore Constitution and Human Rights Standards, turned a blind eye to the fact that the prosecutor couldn't provide effective evidence on several charges and insisted on a harsh verdict against practitioners. This is a severe incident of persecuting Falun Gong practitioners."

In closing remarks, Attorney Dodwell pointed out that Falun Gong is being brutally persecuted in China. Falun Gong practitioners worldwide, including practitioners in Singapore, are working hard to clarify the truth of Falun Gong. According to Singapore's Constitution, spreading their own belief is their basic right. They are deeply concerned about people being persecuted in China and believe that clarification of truth and exposure of China Communist regime's lies in Singapore would help rescue precious lives in China. This cannot be ignored or taken lightly. We can pretend that the persecution in China does not affect us, but it affects the whole human race.

Attorney Dodwell stated that the number of deaths in China was escalating and that Falun Gong practitioners were persecuted in prisons and labor camps. Many were even tortured to death. Therefore, the two accused persons must be considered under such context.

Attorney Dodwell said in an interview that every Singapore citizen is endowed with freedom of speech and freedom of belief. Except under special circumstances, the citizen's constitutional rights should not be weakened or deprived by law enforcement departments.

He said, "True criminals do exist. They are those killing people in suppression of religious belief. Thus every Falun Gong practitioner has the right to expose the atrocities of those persecuting Falun Gong practitioners. The basic human rights cannot be restricted by law enforcement mechanism of the country. Law should be a tool to bring true criminals into justice."

The Judge ignores practitioners' constitutional rights and the persecution in China

The Judge said before she made the verdict that she could not accept the defendants' counterplea that they were exercising their constitutional rights and freedoms of expression and belief.

Falun Gong practitioners were shocked at the Judge's attitude and felt sad for her. They believe that the purpose of legislation is to uphold justice and safeguard goodness. That is the reason why the law is sacred. Unfortunately in Singapore, this connotation of the law is lost when dealing with Falun Gong issues. They asked, "On March 7, the Lianhe Zaobao published a report about Annan's commendation and thankfulness for Singapore's active participation in providing tsunami relief. According to the Judge's logic, does the tsunami occurring in Indonesia have anything to do with Singapore? One cannot avoid natural disasters, but the persecution in China is a man-made disaster. We should help even more so because man-made disasters can be avoided."

In the process of applying for permits for activities in Singapore, power overruled the law.

It is reported that although Singapore's Constitution ensures its people the basic freedom of expression, Singapore has a set of very effective mechanism to control and restrict the free exercise of the basic rights ensured by the Constitution. Namely, related authorities have the absolute power to arbitrarily issue or refuse to issue permits or certificates. Whether an application is approved or not is entirely depending on the related institutions' will.

Falun Gong practitioners in Singapore had applied for a ápermit for the VCDs, but no films exposing the persecution of Falun Gong in China, including the "Truth of Tiananmen Square Self-immolation" obtained a certificate. Only films positively introducing Falun Gong obtained certificates.