On April 25 2005, practitioners in Japan rallied in front of the Chinese Embassy in Tokyo to mark the 6th anniversary of the "April 25" Peaceful Appeal. Practitioners displayed "Falun Dafa is Good" and "Bring Jiang Zemin, Liu Jing, Luo Gan and Zhou Yongkan to Justice" banners to spread the greatness of Falun Dafa and expose the ongoing persecution of Falun Gong in China 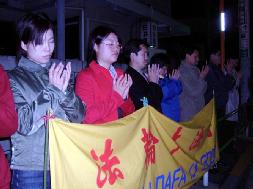 Sending Righteous thoughts in front of the Chinese Embassy in Tokyo

Six years ago, more than 10,000 practitioners peacefully appealed to the Chinese Communist regime which is known for its dictatorship, ruthlessness, corruption and falsity, in order to demand the unconditional release of Tianjin practitioners who had been arrested and the right to cultivate the principles of "Truthfulness-Compassion-Forbearance." The great compassion, endurance and morality demonstrated by the practitioners during the appeal moved the world and also resulted in a temporary solution to practitioners' requests. This first-ever democratic dialogue between the government and Chinese citizens was highly praised around the world and was regarded as a good step toward democracy. But driven by his jealousy and evil nature, Jiang Zemin and his followers started an unprecedented brutal persecution of Falun Gong just 3 months later. One of their excuses to persecute Falun Gong was that practitioners "Besieged Zhongnanhai" on April 25 1999.

Facing this most wide-spread and brutal persecution, practitioners have been continuously clarifying the truth to people who have been brainwashed by the lies of the Jiang regime. One of the most important topics is the "April 25" peaceful appeal, which was completely peaceful and legal. The appeal is actually one of the most important historic milestones in Chinese history.

Among the practitioners who came to the rally in front of the Chinese Embassy, there were PhD researchers, company managers, employees, students and housewives. Ms. Xiao was arrested in China for conducting an appeal for Falun Gong and is currently an employee of a Japanese company.

During an interview, she said: "Due to practitioners' persistent efforts, the attitude of the society and the public toward Falun Gong has changed greatly. For example, people didn't know what Falun Gong was all about in the past. Through the lawsuits against Jiang Zemin and other high ranking communist officials, a lot Japanese people have learned about the persecution. A human rights lawyer commented that this persecution against Falun Gong is unprecedented.

"Through practitioners' truth-clarification, a lot of citizens, including many Chinese in Mainland China and overseas, have learned the truth. Having witnessed practitioners' spontaneous efforts to peacefully safeguard their basic rights, many people have joined us. The current tide of quitting the Chinese Communist Party is actually a reflection of hearts awakening.

"I remember that someone asked me when this persecution would end. Though we don't know when it is going to end, we will continue our effort to end it as long as it hasn't. Practitioners' peaceful and rational reaction to the persecution has showed the public what is righteous, and it will help people to change toward goodness. Therefore, more people, including Chinese, will join our efforts in the future."