(Clearwisdom.net) On April 24, 2005, the New York International Falun Dafa Cultivation Experience Sharing Conference was solemnly held at the Sheraton New York Hotel in Manhattan. About 4,000 Falun Dafa practitioners from around the world attended the Fa conference. More than 10 practitioners shared their cultivation experiences in validating the Fa and saving sentient beings, exhibiting the magnificent manifestation of Dafa disciples assisting Master to rectify the Fa and offer salvation to sentient beings. 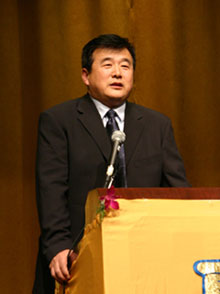 Master comes in person to teach the Fa. 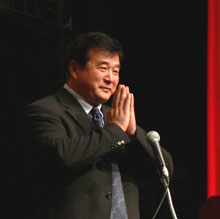 Around 4 p.m., benevolent great Master came in person to the conference hall and taught the Fa for about 30 minutes.

Benevolent Master told us in his lecture that Dafa disciples both inside and outside of China have become more and more clearheaded and are able to handle things with rationality.

Talking about the "Nine Commentaries on the Chinese Communist Party," Master stated that everything in the three realms was established for the Fa rectification, that any form in the human world can be used in the process of Fa rectification to save sentient beings, and that we are not getting involved in politics. Cultivators have no interest in political power. Many Chinese people are befuddled by the party's culture and don't want to listen to the truth. The "Nine Commentaries," which exposes the CCP's nature, has awakened a lot of people and helped them learn the truth. This is for the sake of saving sentient beings.

Master stated that Chinese people in Mainland China are from very high levels, and that many people were reincarnated from kings of various nationalities. This group of people is not ordinary; they have great predestined relationships. The reason that they had the courage to reincarnate as human beings was their hope to obtain the Fa. We should think of ways to save them.

In the end of the Fa lecture, Master once again stressed to practitioners that the form of cultivation in the period of Fa rectification is different from any form of cultivation in previous times. The responsibility borne by Dafa disciples in the Fa rectification period is great. Practitioners should cultivate themselves well and do the three things well. Only when one cultivates well can one's truth-clarification be powerful, and one's words move people and hence save people. No matter under what situation, practitioners should not act impulsively; instead, practitioners should always display Dafa disciples' demeanor. We should cultivate ourselves well without covering up those areas where we fall short.

About 4,000 Dafa practitioners from around the world attend the Fa conference

The podium in the main conference hall was decorated with flowers. Master's Fa image was hung in the middle. Images of the Falun emblem with the words, "Falun rotates forever" and "Truthfulness-Compassion-Forbearance" were hung on both sides. Two large vertical banners were imprinted with, "Mercy can dissolve heaven and earth, bringing about spring," and "Righteous thoughts may save people in the world" (from Hong Yin II). A huge image of the Falun emblem was hung in the middle of the conference hall. On the back two sides, two large vertical banners read, "The Lord of Fa is compassionate, and creates the vast firmament" and "Dafa encompasses and harmonizes, and heaven and earth is rectified" (from Hong Yin II). The entire conference hall was peaceful and solemn and practitioners were all very happy.

The practitioners' sharing covered experiences from the anti-torture exhibit sites in Manhattan to the lawsuit against Jiang filed in Japan, from computer technical support in Taiwan to the wide spread of Falun Dafa in eastern Africa. The experience sharing exhibited the journey of Fa-rectification cultivation in which practitioners were able to let go of selfishness, dissolve into Dafa and become integrated into one body to conscientiously offer salvation to the world's people.

From the end of last August to the present, group after group of practitioners gave up their comfortable family lives and overcame all kinds of difficulties to come to Manhattan, New York. From the hot summer to the cold winter, they performed live re-enactments of torture methods used against fellow practitioners in China so as to expose the persecution and save the world's people. Practitioners from Taiwan talked about how they overcame the language barrier, the different environment, and different customs to come to Manhattan. The remembered Master's teaching:

"When it is difficult to endure, try to endure it. When it looks impossible and is said to be impossible, give it a try and see if it is possible." (Lecture Nine, Zhuan Falun)

Their experiences of taking hardship as joy in the process of saving sentient beings and rapidly improving themselves in the Fa-rectification were quite touching.

A practitioner shared her experiences as a coordinator of an anti-torture exhibit site, how she looked inward whenever she encountered conflict and shared understandings with fellow practitioners so as to prevent the evil from taking advantage of practitioners' loopholes. She also shared her story of persisting in demonstrating the torture methods in bad weather, which allowed a person with a predestined relationship to attain the Fa.

Two western practitioners talked about how they utilized the opportunities provided by their work environment to clarify the truth with wisdom to employees and managers of their bank and corporation. They also talked about how they corrected where they fell short in their cultivation and did better in their daily work and lives.

A practitioner from Japan introduced how Japanese practitioners worked with assistance from a Taiwanese practitioner who is a lawyer to clarify the truth to the Japanese legal community. They found an attorney who was willing to help them without charge and filed a lawsuit against the chief perpetrator, Jiang, and his accomplices in a civil court in Japan. This lawsuit was widely reported by major Japanese media.

A practitioner from Australia shared her moving experience of going to East Africa to spread Falun Dafa. In an African country that has a close trade relationship with the Chinese communist regime, two local people quickly recovered from severe illnesses through practicing Falun Gong for about two to three weeks. The practitioner from Australia used her wisdom from the cultivation of Dafa to break through the indifference of the media and helped more African people learn about the mighty power of Falun Dafa through media reports. Falun Dafa embraces all beings on the earth.

Another practitioner shared her state of mind as a cultivator as she negotiated with business people, and how she took truth-clarification and saving sentient beings as the first priority when she was doing her work.

A practitioner shared her experience of how she widely exchanged understandings with fellow practitioners and whole-heartedly supported practitioners with her righteous thoughts and righteous actions when confronting major issues. With the thought of saving sentient beings in mind at all times, practitioners were able to calmly and unhurriedly handle everything well and achieve positive results, even though the time was tight and they were under great pressure.

A new practitioner talked about how he naturally quit taking drugs and stopped other bad behavior after he started cultivating Falun Dafa. He once again thanked Master for giving him a new life.

A large number of new practitioners and people who support Falun Dafa attended this Fa conference. It is the great fortune of their lives that they support Dafa.

At present, people can see that a great change in the situation of Falun Dafa in the human world has occurred. The evil can barely manage to maintain a feeble existence and the wicked party's fearful fate is just around the corner.

At 6 p.m., the Fa conference concluded after viewing Master's Fa lecture video. Practitioners then continued in their journey of validating Dafa and constantly cultivating well until they achieve consummation.

“Many Practitioners Employed by the West Open Mine in Chifeng City, Inner Mongolia Autonomous District, Died as a Result of the Persecution”