Satellite Broadcast of the Movie, "Sandstorm," to Spanish-speaking Countries (Photo)

The film "Sandstorm," portraying the Chinese Communist regime's persecution of Falun Gong, was broadcast through the Spanish satellite "HISPASAT" from February 14-25, to all Spanish-speaking countries in both the Americas and Europe. 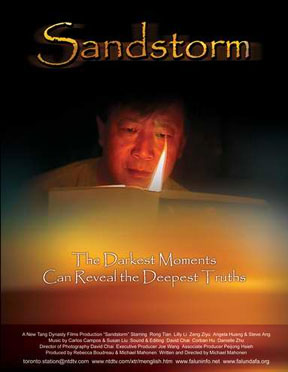 This film was broadcast via the channel "Essence and Vision," which supports the protection of human rights and has 590 million Spanish-speaking viewers. Through watching the program, millions of viewers had the chance to learn about the persecution against Falun Gong in China. The producer of the program, who has also exposed China's persecution of Tibet, didn't know that the Chinese Government and Jiang Zemin had employed such cruel torture methods in carrying out the persecution against Falun Gong practitioners, who believe in "Truthfulness, Compassion and Forbearance." Through talking to practitioners, she realized the severity of the genocide taking place in China.

The program producer is a devout Buddhist who firmly believes that "good begets good, and evil leads to evil," as the Chinese saying states. She was deeply touched by "Sandstorm" and her eyes were brimming with tears. Though she has watched many tragic movies, she said that none made her feel as sad as this one.

The producer told practitioners that for many years she has devoted herself to the protection of human rights, but she had never heard of such a horrendous persecution, targeting millions of innocent people who want to become better people through a peaceful practice. She felt that Jiang Zemin and the Chinese Communist Party's suppression of those who believe in "Truthfulness, Compassion and Forbearance" is tantamount to the oppression of humanity, which is the most intrinsic quality of human life. She also seriously promised practitioners that she would bring this movie not only to the entire Spanish-speaking world, but also the whole of Europe through international film festivals.

The producer told practitioners, "As soon as I saw your unwavering spirit of perseverance, I was determined to help you." She added, "It's God's arrangements that we were able to let millions of people know about this horrible persecution happening in China. I don't know what happened to the 590 million Spanish-speaking people after they viewed the movie, but one thing is for sure, many people would have been deeply moved.

"Thank you for giving me this opportunity to help such a huge number of people who are suffering, by means of spreading this message around the world: Justice and freedom shall belong to all Falun Gong practitioners."