With the support of Amnesty International UG student chapter, Falun Gong practitioners held an anti-torture exhibition on the campus of the University of Glasgow (UG) on February 14 and 15. Before the exhibition, practitioners obtained the names of the faculty members of four departments and prepared more than three hundred invitation letters. Information on Falun Gong and the genocide happening in China was attached to the invitation letters and they were delivered to the mailboxes of the faculty members with help from the Amnesty International student group. 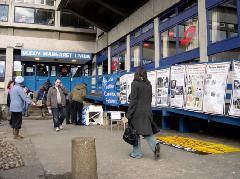 Clarifying the truth on the University of Glasgow campus

During the two-day anti-torture exhibition, four thousand leaflets were distributed to students and faculty members on the campus. Many of them signed a petition to support Falun Gong practitioners' human rights after viewing posters exposing the methods of torture used by Chinese police officers in cruel attempts to force Falun Gong practitioners to give up their beliefs. A lot of students asked questions about the persecution and expressed their disgust at the brutality of the Chinese Communist regime.

After signing their names, two faculty members asked for several copies of the leaflets from practitioners. Before long one of their colleagues approached practitioners and said he had been given the leaflet and would like to sign the petition.

A French professor took some leaflets and petition forms with her after she signed her name. She said she would like to ask her colleagues to sign, too. In a sad tone, she told us, "I know very clearly about the persecution that happens in China because I used to live under the jurisdiction of the Communist Party [Romania]. What you are doing now is very good. I wish you great success."

Students from China also came to see the persecution pictures. One of them asked, "Does this kind of torture really happen? Why didn't we hear about it back in China?" A Chinese practitioner told him about her friend, who was electrically shocked for refusing to give up Falun Gong. The practitioner also told him that due to China's media being under control of the Chinese Communist Party (CCP), it is very difficult for news on the persecution campaigns run by the CCP to reach the public spotlight. The students took Video-CDs after talking with the practitioners.

A young Chinese student talked to a western practitioner for a long time. She asked about the propaganda of the CCP. The practitioner told her about the benefits practising Falun Gong had brought him, such as improvements in mind and body. He also mentioned that Falun Gong forbids killing and suicide. Through him, she realised that the CCP is merely spreading propaganda to turn the Chinese people against Falun Gong. The Chinese student expressed her appreciation to the practitioner and told him, "You have resolved my doubts." She took a lot of materials of different kinds so that she could carefully read them later.

The student chapter of Amnesty International held a Falun Gong seminar in the evening of the anti-torture exhibition's second day. Practitioners demonstrated the Falun Gong exercises and talked about the practice; they told the students what Falun Gong is, why Falun Gong is so popular around the world, why former Chinese dictator Jiang Zemin and the Chinese Communist Party would persecute Falun Gong and what kind of torture methods have been employed during the persecution. They explained that Falun Gong's guiding principles are Truthfulness, Compassion and Tolerance and there has never been a single case of practitioners retaliating against their persecutors, even under severe torture. On the contrary, what Falun Gong practitioners have resorted to are peaceful appeals calling for an end to the persecution and legal means to bring Jiang and his accomplices to justice in international courts.

The seminar ended in warm applause from the participants. All participants took Falun Gong leaflets and details of a motion that members of the House of Commons have proposed for Falun Gong. They said that they would write to their Members of Parliament and urge them to sign the motion.