Northern Europe: Falun Gong Practitioners Call for an End to the Persecution (Photos)

(Clearwisdom.net) St. Louis, located in France's Alsace province, is a small city on the Swiss border.

Several weeks ago, in order to help more people learn about Falun Gong and the serious human rights violations against practitioners in China, we decided to introduce Falun Gong to the people of St. Louis. Many people had already heard about the practice and were interested in finding out more. 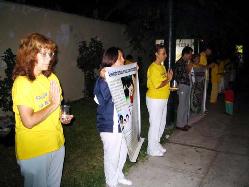 On the evening of January 27, 2005, Falun Gong practitioners held a peaceful appeal in front the Chinese Embassy in the Republic of South Africa.