The First Thing After the Exam (Photo)

The Taiwan University Aptitude Exam was held near the end of January and the results were published on February 23. Among 160,000 applicants, 106 high school students had perfect scores. One of them was Chong Shanglun from Tainan First High School. In contrast to other students being overjoyed and celebrating, Chong Shanglun chose something different: he started to practice cultivation in Falun Dafa. 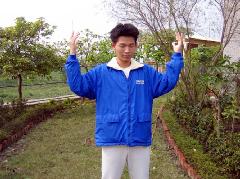 Shanglun's mother is a teacher at Tainan City Houbi High School. She suffered from various diseases for many years. Three years ago, she learned Falun Dafa from a friend. When Shanglun saw his mother's quick recovery to health and saw her change from being depressed and irritable to optimistic and peaceful, he knew that Falun Gong was a good practice. After some initial learning of Falun Dafa and attending a Falun Gong Camp for young people, he didn't actually start on the cultivation path because of the high pressure of his studies and the upcoming university entrance exams.

His mother said that Shanglun was a sweet and obedient boy and didn't need to worry about his studies. After he entered high school, he lived in a dormitory and was the suite administrator. When dealing with other students' lives and problems in the dorm, a lot of conflicts occurred and confused him. He often talked to his mother, seeking advice.

Ms. Chen, Shanglun's mother said, "I haven't pressured him to get certain scores in his studies, but I do tell him to keep a high moral standard in his heart. In the present society, morality sounds very abstract, but just following the teachings in the book Zhuan Falun and living according to "Truthfulness-Compassion-Forbearance" will bring one to a high moral standard. I told him, when negotiating with other students, not to carry the attachment of competitiveness. In such a society where morality is deteriorating every day, it is likely that many students have some incorrect behaviors and a variety of thoughts. I tell him to deal with others peacefully and calmly, communicate with others honestly and compassionately, and the problems may have a unexpected solution."

The mother gradually taught her children the principles of Falun Dafa in daily life. Although Shanglun and his elder sister were not actually practicing Falun Dafa, they were already learning Falun Dafa in their hearts. Six months ago, his sister started to practice Falun Dafa, which gave her brother another push. He said, "My sister's temper changed a lot after practicing Falun Dafa. Before, because of her bad temper, she would argue with mother. Now things are different." So right after he completed the university entrance exams, Shanglun began to practice Falun Dafa.

After he read through Zhuan Falun, he said to his mother, "The Buddha Law is supernormal." A modern student still can accept the ancient traditional Chinese teachings. He said, "The Buddha Law is an unknown area in today's science. Modern science only exists in this material world, but the Buddha Law is the law of the whole universe. It is profound and vast."

Falun Gong is popular in over 60 countries and has over 100 million practitioners throughout the world. Among them, there are many people with master's or doctoral degrees, senior professionals, and experts in medical, judicial and academic areas.

“Slovak Republic: Mayor of the City of Pezinok Attended Falun Gong Appeal to Sign a Petition Calling for an End to the Persecution (Photos)”