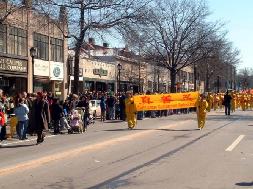 The Falun Gong procession in the parade 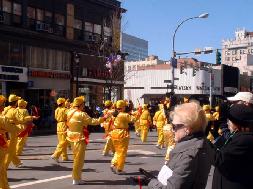 In this year's parade, Falun Gong was the only group representing traditional Eastern culture. The procession was led by the Lion Dance team and followed by the Waist Drum team. The last team was made up of dancers performing the Green Lotus Flower and Celestial Maiden Dances.

The Waist Drum team of the Greater New York Area has participated in many large events. The procession marched in good order, and the bright yellow exercise suits worn by the practitioners were made a beautiful contrast against the blue sky. The "Celestial Maidens" danced in the chilly weather with soft fans, displaying the purity of cultivation practice. 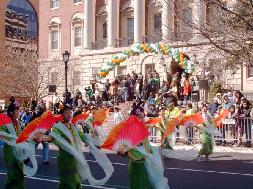 When the Falun Gong procession was passing the stage, the host said, "What a beautiful group!" The spectators were kind and enthusiastic. They waved to Falun Gong practitioners and applauded warmly. Some children imitated the movements of the "Celestial Maiden Dance."

Reporters and cameramen pointed their lenses toward Falun Gong.

The country of origin of the St. Patrick's Day celebration, Ireland, has also embraced Falun Gong, as there are many practitioners in Ireland. Ireland's Prime Minister Bertie Ahern expressed his concern over the persecution of Falun Gong when he met China's Prime Minister, Wen Jiabao, in 2004. Both the Prime Minister and Deputy Prime Minister (Mary Harney) have made efforts to rescue Chinese international students persecuted in China.

“Chinese in UK: "From the Words, 'Truthfulness-Compassion-Tolerance,' I Know that Falun Gong is Good"”