(Clearwisdom.net) Powerful but unknown forces are at work in a small companion galaxy of the Milky Way, astronomers say in the latest issue of the journal Science.

Something is keeping the structure and magnetic field of this galaxy (the Large Magellanic Cloud) strong and ordered, even while the Milky Way's gravity works to tear them apart. 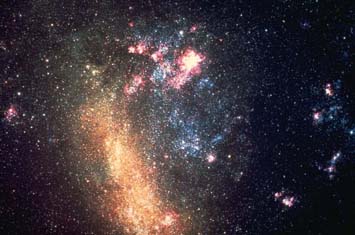 The Large Magellanic Cloud is the brightest galaxy visible in Milky Way.

A team led by Bryan Gaensler of the Harvard-Smithsonian Center for Astrophysics used the CSIRO Australia Telescope near Narrabri in NSW to study the galaxy's magnetic field.

At just 160,000 light-years away the Large Magellanic Cloud, or LMC, is the Milky Way's closest neighbor and is being clawed apart by the Milky Way's gravity. The researchers were surprised that the LMC's magnetic field is so smooth and ordered, given the internal turmoil the galaxy must experience.

"It's like having a birthday party all afternoon for a bunch of 4-year-olds, and then finding the house still neat and tidy when they leave," Gaensler says. "Some powerful forces must be at work to keep the magnetic field from being messed up."

"But if a galaxy experiences sudden bursts of star formation or supernova explosions, the energy that these processes release should completely disrupt the large-scale magnetic field,"" says Lister Staveley-Smith of the CSIRO Australia Telescope National Facility.

"And we know the LMC has had those kind of violent events over the last several thousand million years," he says.

So what keeps the LMC's magnetic field in order? Astronomers are still searching for it.

Gaensler says, "You could say this galaxy is thriving on chaos."