(Clearwisdom.net) My name is Zhao Liping. I am a Chinese medical doctor working in Edinburgh, Scotland. I came to the U.K. in December 2001 and have been living and working here ever since.

My Chinese passport expired on July 27, 2004. Because my passport had to be submitted to the Immigration & Nationality Directorate to apply for a work visa, it was not returned to me until late August. I then needed the passport to open a bank account. Therefore, it was September 13 before I got to the Chinese Consulate in Edinburgh to collect the application form to extend my passport. On Monday of the following week, I went to the Chinese Consulate again to apply for an extension of my passport. The clerk told me that I would need to submit a letter to explain why the extension was not filed before the expiration date. On September 27, I submitted all of the requested documents. The Chinese Embassy gave me a receipt and told me that my passport would be ready for pickup on September 30. I had to work at a clinic that day, but I got a phone call from the Chinese Embassy around one o'clock in the afternoon. I was told that their equipment was out of order, and I would have to wait for further instructions by phone after October 1. 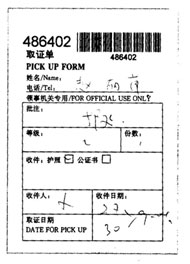 However, I have never received another phone call from them. On October 11 and 18 I made two trips to the Chinese Embassy, trying to find out what was going on. I said, "Why can other people's passport extensions be processed within three to five days, but mine is different from the others? Is it because I practice Falun Gong?" At first the clerk replied, "Yes," but he immediately corrected himself and said, "No." He went on to say, "All of the applications have to wait for instructions from Beijing." I asked him which department in Beijing. He said that information was confidential. I asked to talk to the Consul in person. He first said that the Consul was on a business trip, but later on he said that the Consul had no time. Nevertheless, he promised to pass along a letter to the Consul if I wanted to write one.

I wrote a letter on October 30 and asked the clerk to give it to the Consul. One week later I went to the Consulate again to inquire about the situation. I was told to keep waiting.

I paid another visit to the Chinese Consulate on Monday, January 24 of this year. They returned the expired passport to me and told me to keep waiting. They tried to evade their responsibility by claiming that the authorities in Beijing had not yet given them any instructions.

It has been more than three months since I submitted my passport and the required documents. The Chinese authorities have deprived me of my basic rights as a Chinese citizen, without any reason or explanation. My practice of Falun Gong fully complies with the Chinese Constitution, which ensures Chinese citizens of the right of freedom of belief. What the Chinese Consulate has done does not conform to Chinese law or international legal regulations. By describing what has actually happened to me, I hope that they will seriously review what they have done and not continue to blindly follow orders from Jiang's faction.

The following is the letter that I submitted to the Chinese Consulate in Edinburgh on October 30, 2004.

I came to the Consulate in Edinburgh to file an application to extend my Chinese passport several weeks ago. The advice I was given was to wait for official instructions. More than a month has passed. I know my case has subjected you to a difficult situation because I am a Falun Gong practitioner. I believe that you have a certain understanding about Falun Gong. I can understand that some matters are tough to deal with in your position. However, I hope you can pay more consideration to my case.

I have practiced Falun Gong for more than seven years. During this time, there have been significant changes in my mind and body. My marriage ended in divorce in 1997, before I began practicing Falun Gong. At that time, my daughter was ten years old, and I had custody of her. She had a gastric ulcer and was receiving regular medical treatment at a children's hospital. I also suffered from a severe sleep disorder and had two abnormal conditions of the cardiac muscle enzyme. The Western physician suspected that it was a virus-induced cardiac muscle inflammation. I often felt short of breath. Even though I took various kinds of Chinese and Western medications, the symptoms did not improve. I also resorted to qigong therapy. I spent a lot of money to avail myself of several different qigong therapies, but my physical condition continued to deteriorate. I had to take a lot of sick leave. My life at that time was very unhappy.

One day a friend loaned me a copy of Zhuan Falun. I read it several times and liked the book a great deal. It teaches people how to become good. No matter what we do, we should consider others first, and asked ourselves, will what we do hurt anyone and can others put up with it? Whenever there are problems or tribulations, we have to examine what we have failed to do well first, not scrutinize others for imperfections. I strived to carry out these teachings in my daily life and work. Little by little, I noticed that everything around me started to change. No longer did I think that God had treated me unfairly, and I also let go of a lot of resentment that I used to hold on to. My life became relaxed and pleasant. Everyone at work said that I had become a totally different person. As I kept practicing, there was a dramatic change in my physical health. I didn't have to take pills or pay a penny in medical expenses.

My daughter read the Falun Gong books and practiced the exercises with me. Her gastric ulcer was cured, and her schoolwork at a prestigious Beijing elementary school was outstanding. She made perfect scores in all her subjects in the graduation examination. My daughter and I benefited from learning Falun Dafa without paying a penny. Fellow practitioners taught us the exercises free of charge. On July 20, 1999, China began to persecute Falun Dafa. Many people did not know what had happened at that time. However, I never had any doubt about Falun Dafa, and accordingly, I didn't give up cultivation.

Frankly speaking, the Chinese citizens have gone through too many political campaigns. A person who is the president of the country today can be treated as a traitor tomorrow. Falun Gong has been suppressed for five years, but why does the number of practitioners keep increasing? Some people started their cultivation just because they wanted to know what Falun Gong was all about. It is because the principles of "Truthfulness, Compassion, Forbearance" promoted by Falun Gong resonate so deeply in people's hearts. Everyone has compassion and kindness. Everyone wants to live in a wonderful environment and to look forward to friendly interpersonal relationships. This is why Falun Gong has been practiced by one hundred million people in more than sixty countries around the world, regardless of race or age.

It is very challenging for the Chinese people to make a living in a foreign country. Practitioners use money from their own pockets to prepare leaflets and other materials to help people understand what Falun Gong is, and to tell them about the persecution taking place in China. They use their leisure time to explain the truth to the Chinese people who have been deceived by TV stations and newspapers, because this persecution has something to do with everyone. If we keep silent today about the persecution of Falun Gong, the persecution may happen to us tomorrow. In fact, it is not hard to understand our motives in clarifying the truth, if one thinks about it more carefully: Who would want to go out on the streets in bad weather? Who wouldn't want to enjoy delicious food and spend happy times with family members? If it were not for our innermost belief, who could persevere in reflecting the true situation to the Chinese Communist Party and the Chinese government for five consecutive years? As a matter of fact, in China, as soon as a Falun Gong practitioner gives up practicing Falun Gong, he can regain the right to work or receive an education, instead of being sentenced to prison and tortured for his belief. In foreign countries, he can also possess a valid Chinese passport. On the other hand, everybody also has a conscience. How can we pretend that Falun Gong is harmful while Falun Gong has indeed saved us and brought us so many benefits? Conscientious Chinese citizens are paying a very high price simply because they want to tell the truth.

One of my friends made an appeal to a higher government office in Beijing on behalf of Falun Gong. The receptionist didn't look at her letter at all, but threw it directly into a garbage bag. Immediately after she filled in the appeal form, my friend was taken to the police station. She went on a hunger strike as a protest, but was brutally beaten with electric batons and force-fed. When I went to see her, there were still bruises on her hands. Another practitioner was beaten to paralysis and eventually lost her life at a young age because she refused to abandon practicing Falun Gong. I tried to go to her funeral service, but the police blocked me. The only thing that my friends and I could do was to take a taxi and go to the mortuary directly. Another practitioner, who graduated from the same school as I, was in the final year of his university studies. He was expelled from the university and sentenced to labor "re-education." I feel extreme sadness every time I think of these fellow practitioners. As Falun Gong practitioners in foreign countries, what can we do for them? We hope to bring this persecution to an end as soon as possible. We are not against our country, nor are we against the staff members of the Chinese Consulate. Our cultivation practice has nothing whatsoever to do with a desire for political power. All that we have been doing is to try our best to help fellow practitioners who are being persecuted in China.

It has been three years since I started working in a foreign country. I miss my own country, my parents, and my relatives. I can't go back to China without a valid Chinese passport, which will cause me a lot of mental suffering and inconvenience. I hope you can evaluate my case more carefully and resolve the issue of my passport extension.

Thank you very much.

“Germany: Telling People about the Persecution During the Mardi Gras Parade in Offenburg (Photo) ”