(Clearwisdom.net) On the afternoon of the 11th of February 2005, on behalf of Falun Gong practitioners, Lawyer Fabrice Orlandi filed a legal petition to the Tribunal de Grande Instance de Paris. The petition requested a comprehensive investigation into the incident on January 2004, in which, bowing to the pressure from the Chinese communist regime, French police harassed Falun Gong practitioners. 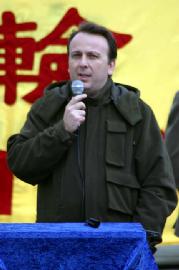 During the Chinese leader's state visit to France at the end of January 2004, a few hundred Falun Gong practitioners gathered in Paris for a peaceful appeal requesting China to stop the campaign of genocide against the practice. Appealing is a basic human right for people in a free and democratic country and is also the founding principle of France. Regrettably, bowing to pressure from the Chinese communist regime and violating its own basic principles, relevant French organisations carried out arbitrary searches, arrests and detention of Falun Gong practitioners. This not only violated the practitioners' basic freedom, but also led to a more serious consequence: Falun Gong practitioners were impeded in their efforts to expose the brutal persecution of Falun Gong in China to the governments, media and people. It also unwittingly helped the persecutors of Falun Gong. Therefore, this is a very serious issue.

After the incident, French Falun Gong practitioners, together with practitioners from other countries, made great efforts to explain to the French Government, media and legal profession, as well as those from other countries, what Falun Gong is and the enormous extent to which the practice has been violently suppressed in China. Many politicians from different nations raised their concerns and expressed their support. Meanwhile, French practitioners have been actively seeking legal means to obtain justice.

After careful preparation and overcoming much interference on behalf of Falun Gong practitioners, Lawyer Fabrice Orlandi filed a legal petition to the Tribunal de grande instance de Paris requesting a comprehensive investigation into the incident.

In the petition, the Lawyer first outlined the background of Falun Gong's teachings of Truthfulness, Compassion and Forbearance, the practice's spreading all over the world, the brutal persecution of Falun Gong by Jiang Zemin and the Chinese Communist Party, and Falun Gong's peaceful and rational appeals calling for an end to the persecution. The lawyer thinks the reason behind the French police's arbitrary detention of practitioners last year was that these people practise Falun Gong. This constituted violations against personal freedom.

Finally the legal petition states that Falun Gong practitioners and the French Falun Dafa Association, who as host issued invitations to practitioners from other countries, considered that their basic rights were violated and decided to file the lawsuit. Section 432-4 of the Criminal Law accuses the improper use of power by persons carrying out their duty. In addition, persons involved in this incident may also have violated the European Human Rights Treaty and 1996 Citizen and Political Rights Charter.

Because the petition did not limit the persons involved in the incident, it is possible that the investigation could target the black-hands from the Chinese Communist regime that controlled the event from behind the scenes. 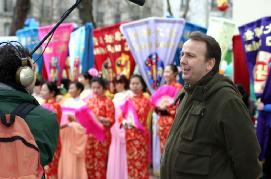 On the 12th of February 2005, a few hundreds Falun Gong practitioners held a big Chinese New Year parade in Paris's Belleville where many local Chinese people live. Lawyer Fabrice Orlandi attended the celebration and told the public, "In democratic countries like France, it is totally unacceptable that people were arrested purely because of their philosophical thinking and that people's freedom of expression was taken away just because of the Chinese leader's visit. Your rights must be maintained. The path ahead could be long, but we will walk it to the end."

During an interview with NTDTV and The Epoch Times newspaper, Lawyer Fabrice Orlandi said that this is only the first part of the legal action because it only included twelve witnesses and the French Falun Dafa Association. Others from the group of ninety-seven witnesses will also submit their legal petitions. As soon as a judge is appointed, the investigation will start to establish how ninety-seven practitioners could have been arbitrarily detained just because they wore yellow scarves. The lawyer also said that this is the year of the Rooster; the Rooster is the symbol of France and it is also symbolises the will to fight. Let's hope that our fight for maintaining our rights will extend over national boundaries and reach the shores of China.