On the afternoon of December 4, practitioners held a grand march in District 13, where many Chinese people live. In the march, practitioners held banners worded "Falun Dafa is great", and "Bring Jiang Zemin, Luo Gan, Liu Jing and Zhou Yongkang to Justice". At the same time, the Falun Dafa Association Announcement was read in both Chinese and French. Practitioners requested Wen Jiabao to stop the persecution of Falun Gong and bring those culprits to justice. 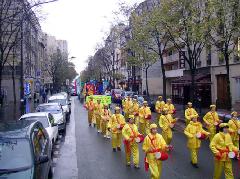 Local Chinese passersby stopped to listen, view, and ask for truth-clarification literature. Local French residents asked for more information about the persecution. Some French drivers waved their hands to express their support while waiting for practitioners' procession to pass by.

Near the end of the march, a few young Chinese people ran up to the procession and asked where they could learn Falun Gong.

On the afternoon of December 5, in front of the Chinese Embassy in Paris, practitioners held a peaceful appeal to call for an end of the persecution and to bring Jiang Zemin, Luo Gan, Liu Jing and Zhou Yongkang to justice. When practitioners unfurled banners reading "Welcome, Wen Jiabao" and others, staff in the embassy looked at them through the windows with curiosity and talked to each other. Some staff members even walked out of the embassy, said hello with a smile to practitioners and asked for truth-clarification literature.

A Chinese person said that the Chinese Communist Party (CCP) has committed many crimes and deceived people. He said that in China many know about the CCP's persecution of Falun Gong and other Chinese people. For the deaths of 2791 practitioners due to police brutality in China, he said the CCP is very cruel. He saw photos about practitioners being tortured and felt sympathetic. 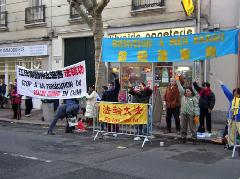 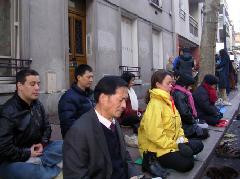 Peaceful appeal outside the Chinese Embassy

Practitioner Alfredo Fava came from Italy and wanted to inform Wen Jiabao that torture and persecution is still occurring in China. As Prime Minister of China, Wen has the responsibility to listen to the Chinese people's petitions and stop the persecution of Falun Gong.