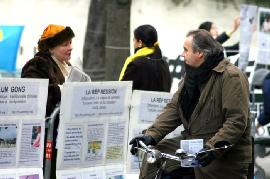 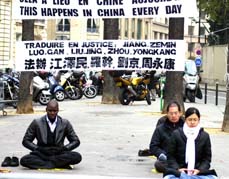 Chinese Premier Wen Jiabao plans to visit France from December 4 to 7. Falun Gong practitioners there obtained approval to hold anti-torture exhibits, unfurl banners, and distribute Falun Gong truth-clarification materials adjacent to the French Parliament, outside the Office of the President, and near the headquarters of UMP (the ruling party of France), to expose the Chinese Communist Party's brutal persecution of Falun Gong.

Falun Gong practitioners unfurled banners that read, "Welcome Wen Jiabao", "Bring Jiang Zemin, Luo Gan, Liu Jing, and Zhou Yongkang to Justice" to encourage Wen Jiabao to choose to stand by the side of justice and make his effort to stop the persecution and punish the chief perpetrators.

Recently, the Director of the Paris Police Bureau signed an order to ban all groups from holding peaceful petitions or protests when the Chinese delegation is in Paris. Some people believed that this order indicated that the French government would trade off a democratic country's fundamental value for the sake of huge business interests. 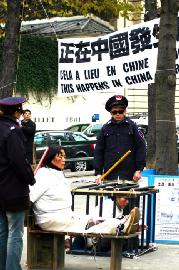 “Toronto, Canada: Condemning the Violent Crimes of the CCP's Police in front of the Chinese Consulate (Photos)”