Paintings exhibited in the "Truthfulness, Compassion, Forbearance" art exhibition were created by a group of artists from different backgrounds who all practice Falun Gong. The paintings were created based on their own experiences and understandings. Some depicted the elevation of mind and body purification and development of character that comes from practicing cultivation. Some depicted the inhuman means that the Chinese communist regime has adopted to persecute Falun Gong practitioners, as well as practitioners' uncompromising courage when enduring the torture. Some paintings showed practitioners' calling for conscience and justice. Each painting portrays one and even thousands of similar stories.

This art exhibition has toured around the world and has been exhibited in many venues in America, Europe, Asia, and Australia. Wherever it is exhibited, it is warmly received and highly acknowledged. In addition to traditional, exquisite painting skills, the meaning of the art works is even more touching.

Falun Gong practitioners contacted the Washington University chapter of Amnesty International and discussed holding a jointly sponsored art exhibition at the university. After practitioners introduced Falun Gong and the persecution that is happening in China, as well as the contents and significance of the art exhibition, those in charge of Amnesty International at the university immediately expressed that they were willing to sponsor such a meaningful event. One of them designed and painted a large poster for the art exhibition.

From October 10 to 13, 2005, the exhibition was held in the Gargoyle Room in the Student Center of Washington University. Members of the WU chapter of Amnesty International and Falun Gong practitioners worked together to set up the exhibition and distribute flyers. Falun Gong practitioners guided visitors to view the paintings and related the stories behind each painting. Visitors were all deeply touched. 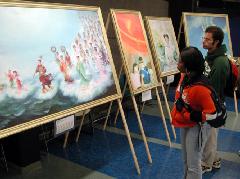 Visiting the art exhibition (this photo was published in Student Life, a publication of Washington University)

On the evening of October 11, a special seminar with the theme, "Stories of Survival from China's Labor Camps" was held in Brown Hall at the University of St. Louis. Falun Gong practitioner Ms. Li Huagui related her experience of being unlawfully imprisoned in a labor camp in China for eight months. A video program introducing the persecution Falun Gong practitioners are suffering was also featured. Many students attended the seminar and actively asked questions. Practitioners' answers allowed them to further understand the facts about Falun Gong and the suppression. After the seminar, many students expressed their support and sympathy towards Falun Gong practitioners. A reporter from Student Life conducted interviews and wrote an article entitled, "Amnesty International Brings Falun Gong art exhibit to campus."

The next stop of the art exhibition was at Southern Illinois University, Edwardsville. The Kimmel Student Leadership Center of SIUE cosponsored the event. After learning the facts about Falun Gong, the coordinator of the Kimmel Student Leadership Center was very supportive of the art exhibit. They made flyers and informed students and different departments of the university to allow more people to come to view the exhibit. There was an episode during the process, which illustrates how the Chinese communist government extends its persecution of Falun Gong all around the world.

The president and vice president of this university's Chinese Student Association wrote emails to related departments of the university in an attempt to prohibit the exhibition from being held. They said in their emails that they received phone calls from officials in charge of education from the Chinese Consulate in Chicago who told them that Chinese students should express their concerns over this event and strongly oppose Falun Gong practitioners holding such an event at SIUE.

This attempt to block the exhibit was not effective at all. Leaders of SIUE expressed that in the U.S., the freedoms of speech and belief are protected. The international student council president clearly stated in his response to the Chinese student's email: "I'm afraid that you don't understand the American principle and law that ensures the freedom of speech. In this country, we allow people to speak even if we may not agree with them. You also have the equal opportunity to express your views. However, the university will not agree to censor or refuse some groups' speech."

From October 16 to 21, the art exhibition was held in the Religious Center of SIUE. On the evening of October 16, there was a gathering of more than 150 people at the center. Organizer of the gathering told attendees that Falun Gong practitioners are being persecuted in China. On October 18, at the lunch meeting held at International Hall in the Student Center, practitioners introduced Falun Gong and the persecution in China to guests. Ms. Li Huagui once again related her own plight. Practitioners also talked about the persecution that Ms. Xue Aimei, who studied at SIUE in 1999, suffered after she went back to China. Simply because Ms. Xue refused to give up her belief in Falun Gong, she has been imprisoned in Sanshui Forced Labor Camp up to the present, where she has been tortured. People were all shocked to learn this. The university's student newspaper published a photo report on October 19 entitled, "Support Falun Gong". During the art exhibit, many people signed a petition calling for the rescue of Ms. Xue Aimei. 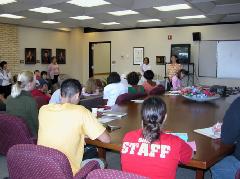 A seminar introducing Falun Gong and the persecution facts

The art exhibitions at St. Louis University (SLU) and the University of Missouri, St. Louis (UMSL) were short due to hurried arrangements and other restrictions. The exhibit lasted only five hours one evening at SLU and one day at UMSL. At first, practitioners were hesitant whether to hold the event at these two universities, since each exhibition requires a large amount of effort in terms of transporting and setting up the paintings. Was it worth the effort for such a short exhibition? But through sharing understandings, practitioners felt that any opportunity to allow people to learn the truth should be cherished. In addition, the student organizations of these two universities sincerely wished to bring the art exhibition and stories of Falun Gong to campus after they learned the facts. Therefore, the exhibition was held as planned and the effect was surprisingly good.

The art exhibit was held on October 27 and November 2 at the two universities, respectively. A constant flow of people came to view the artworks. People who learned the truth expressed their indignation over the persecution and their support of Falun Dafa. Some visitors were very interested in cultivation practice and came to the practice site after the art exhibits to learn the exercises.

The young man who was in charge of the student organization that cosponsored the exhibition at UMSL sent an email after the exhibit, saying that he received much positive feedback from students, faculty and staff members. Therefore, he hoped that a larger scale "Truthfulness Compassion Forbearance" Art Exhibition would be held at the university for a longer period of time next year. He said in his email, "I don't think anyone expected what actually took place at the art exhibit and our students, staff, and faculty were pleasantly surprised at the value of the material and your staff. Several students came up to me with strong compliments." 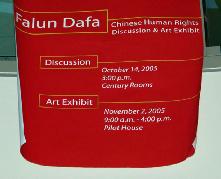 A western Falun Gong practitioner who spent much effort contacting the universities to hold the series of art exhibitions noticed an interesting phenomena. He said that it was not easy to contact people and discuss the possibility of holding the art exhibitions. In the beginning, his requests were often either turned down or he did not receive any response. Later, when he contacted university student organizations, he would first tell them what Falun Gong is and talk about the persecution that is taking place in China. The kindness people manifested after learning the facts was really touching. Truth-clarification helped him overcome difficulties one after another and the art exhibitions were smoothly held.

There were many touching stories during the exhibits. Both cosponsors and visitors of the art exhibits got more chances to learn about the beauty of Truthfulness, Compassion, and Forbearance as well as the evilness of the Chinese Communist regime's persecution. A practitioner who participated in the art exhibits said, "There are still many people who don't know much about Falun Gong and the persecution. Some people are still poisoned by the Chinese communist regime's deceptions, for example, the two Chinese students who were incited by the Chinese Consulate to oppose the art exhibition. What we are doing is exactly for their sake. Our purpose for conducting the 'Truthfulness Compassion Forbearance" art exhibits is to allow people to have the opportunity to learn the truth about Falun Gong and cast off the deceptions of the Chinese communist regime."

“Toronto, Canada: Condemning the Violent Crimes of the CCP's Police in front of the Chinese Consulate (Photos)”