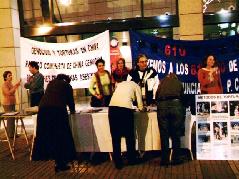 Five years ago, when Jiang Zemin, the former head of the CCP, and the person who initiated the nationwide brutal and illegal persecution campaign against Falun Gong, stopped by the Canary Islands after his trip to South America, Falun Gong practitioners held a peaceful protest on the Island. At that time, the people of the Canary Islands were not quite aware of the evil crimes committed by the Chinese Communist regime in their brutal persecution of one hundred million Falun Gong practitioners, as well as religious believers and democratic activists. Since then, due to the persistent efforts by Falun Gong practitioners and other people of justice informing them about the facts of human rights abuse in China, more and more people on the Islands have learned the facts and joined the anti-persecution campaign.

People are appalled at the CCP's murder of Chinese people, and sign the petition supporting those courageous people who have withdrawn from the party

A gentleman said, "All people of justice support you. Keep going until the persecution ends." Policemen who were patrolling the street also came to see the posters and expressed their support and their wishes for the persecution to stop soon.

“Holland: Exposing the Persecution with a Photo Exhibition in Delft City (Photos)”