(Clearwisdom.net) On December 24, 2005, the Taiwan Falun Dafa Experience Sharing Conference was successfully held at the International Conference Center in Taipei. While the majority of the attendees are from Taiwan, some practitioners from Mainland China, North America, Japan, Hong Kong, Singapore, Thailand, Vietnam and Malaysia also attended this grand gathering. To accommodate the 7,000 strong practitioners and guests, the Taiwan Falun Dafa Association arranged three additional conference rooms besides the main hall. 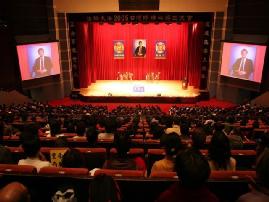 In the lobby outside the conference rooms, several giant scrolls were displayed. The scrolls read "The Fa Rectifies the Human World", "The Fa Rectifies the Cosmos" and "Falun Dafa". The atmosphere inside the conference rooms was very solemn. Inside the main hall, a huge photo of Master hung in the middle of the stage, and a couplet pair was displayed on the sides of the stage. The couplet read,

"Mercy can dissolve heaven and earth, bringing about Spring
Righteous thought may save people in the world"

Beautiful flowers were used to decorate the stage, and a lotus lamp was positioned on the speaker podium to represent the determined hearts of practitioners.

The conference was held from 8:30am to 5pm. The atmosphere was very peaceful and solemn. Practitioners shared their experience in how they managed to make progress step by step in tribulations, let go of personal interest among conflicts, and improve their xinxing standards by giving up attachments. Every speech was a testimony of a determined heart and was very touching.

Practitioner Yang Xiuluan of Kilung is in her 70s. She said that her new life started at the age of 70 when she started to practice Falun Gong. Ms. Yang emphasized the importance of studying the Fa. She has read three or four lectures of Zhuan Falun everyday since she started the practice. Sometimes, she reads the whole book in one day. When she did so, she felt very comfortable and light rather than tired. Once a bus driver couldn't believe that she was qualified for senior ticketing and asked her to show her ID. The driver then found out that she was already 73 at that time. Yang then told him, "I practice Falun Gong and the practice cultivates both mind and body. Practitioners can look younger and younger from diligent practicing."

Practitioner Jian Yunxiang has been utilizing music in truth-clarification. When she was clarifying the truth in Greece, she found that their dance and music performance could better draw people's attention. One day, a strong wind kicked up, and it became very cold. A huge black cloud gathered above their heads, and it seemed that the sky was going to crack open. At that moment, Master's teaching sprung to her mind:

"But you should always remember one thing: no matter who is interfering, it's all temporary, all illusions, not the main body, and it's all just like air flowing through." (Fa-Lecture During the 2003 Lantern Festival at the U.S. West Fa Conference."

When her righteous thoughts became firm, the weather became warm again and the crowds came back.

Practitioner Tang Huiru from Taichong shared how she had been calling China to clarify the truth. She said that she didn't know the best way to introduce the Nine Commentaries on the Communist Party at the beginning. She decided to simply read excerpts of the "Nine Commentaries". Once a while, she asked: "Are you listening? Are your bored?" Surprisingly, the other side often told her: "I am fine, I love to listen to this, please continue." Some Mainlanders even asked to listen to a specific one of the Nine Commentaries. In most of the cases, people would express their willingness to read these articles once she briefly told them the content. Some even wanted to read Zhuan Falun. During the course of calling China, she truly saw that the Buddha Fa is boundless.

At 5 p.m., the conference successfully concluded. From the practitioners' sharing, the attendees developed a better understanding in cultivation: the Fa is solemn, sacred and has firm standards. As every practitioner has the mission to save all beings, it is crucial that each practitioner cultivates well. As Master taught us, "The magnificent Fa and the magnificent epoch are forging the most magnificent Enlightened Beings." (The Disciples' Magnificence)

“Four Practitioners Died Due to Persecution”