Colluding with Jiang Zemin and his gang, the Chinese Communist Party (CCP) has persecuted Falun Gong for more than 6 years using the most vicious and brutal measures. The persecution violates both heavenly principles and human standards, and the CCP is soon to be wiped out by the heavens. Meanwhile, the Nine Commentaries on the Communist Party has exposed the CCP's evil nature, and many people have awakened to the truth. Today, more than 6.5 million Chinese people have openly quit the evil party and its affiliated organizations. While the CCP is staggering before eventual collapse, it is still trying to expand the persecution to outside of China using commercial interests and political influence.

Practitioners around the world have taken action to protest in front of their local Thai embassies and consulates. They are demanding the immediate release of detained practitioners, condemning the CCP for expanding the persecution to Thailand and asking related officials who have assisted CCP to stop doing so.

Chicago practitioners continue to protest in front of the Thai consulate

Chicago practitioners have gone to the local Thai consulate repeatedly to deliver protest letters, protest the arrest of practitioners and condemn the persecution. They urge the Thai government not to give up its sovereignty to appease the Chinese communist regime and to resolve the incident quickly. 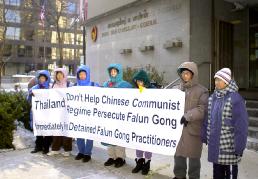 Practitioners repeatedly came to the Thai Consulate in Chicago to protest

Practitioners have been submitting protest letters everyday. When they talked with the Thai consul, the consul asked, "Why are you coming back again?" A practitioner said, "The situation has gotten worse and worse, and practitioners are still being unlawfully detained. They are on a hunger strike and their lives are in danger. We hope that the Thai government will take prompt action and release them immediately." The consult said that he would pass on the message to his country for sure to let his government know the overseas reaction to the incident.

One consulate guard is originally from Poland. Upon learning about the arrest of innocent practitioners by the Thai government under the pressure from the CCP, he said, "I know about the Communist Party, we were persecuted by it for more than 40 years."

Though it is extremely cold in Chicago, there were many people coming out for last-minute holiday shopping. During the past several days, a lot of people who passed by the consulate have seen practitioners protesting in the snow with banners which read, "Thailand, don't follow the Chinese Communist Party to persecute Falun Gong!" and "Immediately release all unlawfully detained Falun Gong Practitioners!" Many of them slowed down to learn about the cause of the protest.

Practitioners also handed out truth-clarifying materials to people who come to the consulate for consular service. Upon learning the truth, they expressed their outrage at the incident. Many raised their thumbs and said, "What you are doing is right. Good luck!"

A group of Koreans told us, "The Communist party is the most vicious thing in the world!" 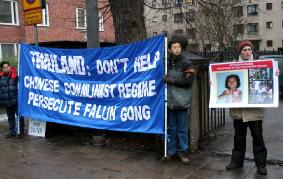 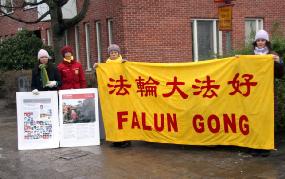 Swedish practitioners protest in front of the Thai Embassy in Sweden 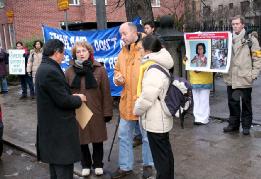 An embassy official talked with the Swedish practitioners 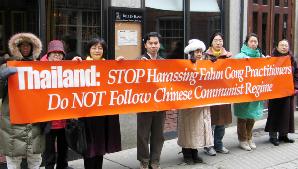 Boston practitioners send their message to the Thai government

In the morning of December 10, Boston practitioners submitted an open letter to the local Thai Consulate and held a protest outside the consulate to express their deep concern over the arrest of practitioners in Bangkok. For the sake of Thailand's future, they urged the Thai government not to follow the CCP to persecute Falun Gong.

In addition, 5 practitioners had a 30-minute meeting with Thai Consul Joseph Milano. After listening to the practitioners' introduction of Falun Gong and the 6-year persecution, Consul Milano said that he had been to China in the past and knew that the Chinese government applied tight control over its citizens. He thought the situation had been improved, but now knows the real situation. Upon hearing the practitioners' request of the immediate release of the detained practitioners and an investigation of the culprits, he said that he would pass on the request to his government, though he couldn't offer much other help due to the limitations of his position.

In the past several days since the incident, the practitioners have received much support from all over the world. Below are messages posted to Falunhr.org:

Ted L'Estrange from Oxford, United Kingdom wrote: "The communist party knows that it can torture with impunity while the world is distracted with the potential rewards of commerce. "

Chris Ameln of Germany wrote: " In the year 2005 it is a crying shame, that a nation like China is still using torture and intimidation... I also support the boycott of Chinese and Thai-made goods. The Thai government must bow their head in shame, as their acts not only violate all human rights, but also the Buddhist belief of non-violence.

Bradley Lavelle from UK wrote: "I am currently boycotting all products from China and will do the same if Thailand commits to this atrocious behaviour. I had planned a trip to Thailand this coming summer but that is very much in doubt now...will spend my money elsewhere...these practices are not acceptable"

Dr. Albert Lin from Western Australia wrote: "The Thai government should release all detained Falun Gong practitioners immediately and stop kowtowing to the Chinese Communist Party, whose collapse is imminent."