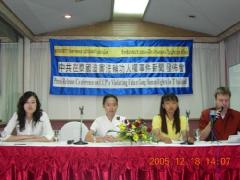 Fourteen-year-old Wang Anqi said, "My parents and I were arrested and taken to the immigration bureau by the Thai police on December 15. Now my parents are being detained and are on a hunger strike. As a child, I feel lonely and sad. As a human being, I feel worried that the Thai government has made such a choice that violates basic human rights."

Chen Hua, a Falun Gong practitioner from Guangzhou City who escaped mainland China, recounted her personal experience of being brutally persecuted by the CCP regime. She said, "The CCP is nothing but a gang of criminals. Why would you [Thai government] choose to make friends with it?

At 10:00 a.m. the same day (Dec. 18), Thailand practitioners gathered outside the Chinese embassy to protest. They unfurled banners reading, "The CCP is a criminal regime!" "Thailand should immediately release Falun Gong practitioners!" and "[We] strongly condemn the rape of Falun Gong practitioners by Chinese police." Shortly afterward, uniformed and plainclothes police arrived. With practitioners' righteous thoughts and truth clarification efforts to the police, the whole event concluded smoothly.