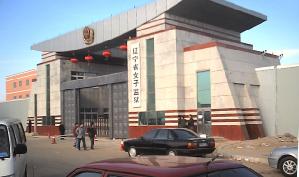 The Liaoning Province Women's Prison has ten wards; there have been more than three hundred Falun Dafa practitioners detained here in 2004

Below are details of the persecution suffered by Ms. Huang Xin, Ms. Gu Changqin and Ms. Yu Fenghua, as related by this Falun Dafa practitioner after being released from the prison recently.

Ms. Huang Xin is a Falun Dafa practitioner in Liaoning Province. She was stripped, thrown into men's cell, and raped by a death row prisoner.

Ms. Huang Xin, in her 50s, lives in Shenyang City, Liaoning Province. She is locked in the Hospital of Liaoning Province Women's Prison, in a dazed state of mind due to being forced to take the drug Chlorpromazine every day. Once, Ms. Huang Xin was stripped, locked in a men's cell, and then raped by a death row prisoner. There were eight female Falun Dafa practitioners, including Ms. Huang Xin tortured in this inhuman way at that time (see also http://www.clearwisdom.net/emh/articles/2005/10/28/66306.html). Ms. Huang Xin was detained in the First Ward when the rape happened. The First Ward heads are Li Hong (gender unknown) and Wu Li (female, current Ninth Ward head).

Ms. Gu Changqin, in her 50s, comes from Heilongjiang Province. She is now locked in the Liaoning Province Women's Prison Hospital. Her sciatic nerve is damaged due to being forced to sit on a two-inch wide narrow stool for a long period of time, making it so that she cannot sit up any more. Ms. Gu was brutally force-fed when she was on hunger strike to protest the persecution. The force-feeding severely injured her throat and stomach. Now she cannot speak or eat due to the injury, and she vomits every time she tries to eat.

Ms. Yu Fenghua was from Dandong City, Liaoning Province. She was tortured until close to death, and then was locked in the Liaoning Province Women's Prison Hospital. People heard her screaming when she was beaten by other prisoners. Prison guard Wang Enli (female) in the Hospital should know more about the persecution of Ms. Yu. Ms. Yu Fenghua died only several days after being released on medical bail (see http://www.clearwisdom.net/emh/articles/2004/5/19/48283p.html).

“A Prophecy from the Cold North of Russia”