(Clearwisdom.net) The weeklong "Truthfulness Compassion Forbearance" International Art Exhibition was successfully held at the Tallaght Institute of Technology in South Dublin between the 5th and 9th of December, 2005.

The deputy mayor of South Dublin County, Karen Warren, and Councillor John Hannon attended the opening ceremony. Councillor John Hannon made an excellent speech. He first learned about Falun Gong two years ago during the campaign to rescue Falun Gong practitioners Liu Feng and Yang Fang who were arrested in China when they went back from their study break in Ireland. Councillor John Hannon initiated a motion in the South Dublin County Council demanding the Chinese Government to immediately release Liu Feng and Yang Fang. The council successfully passed the motion. In her speech at the opening ceremony, Falun Gong practitioner Eileen Browne thanked the Tallaght Institute of Technology for providing the facility for the exhibition. She also thanked Mr. Tim O'Connor, Mr. Paul Columbus and other staff in the copy center.

The art exhibition was held in the entrance hall to the college. This is the main passage to the college. During the weeklong exhibition, many students, teachers and other college staff showed great interest in viewing the artworks. There were even people from the remote Irish Midlands who specifically came to see the exhibition.

John Hannon said that he was very pleased to open the "Truthfulness Compassion Forbearance" International Art Exhibition. He explained, "Truthfulness, Compassion, Forbearance... very good guiding principles in life. But unfortunately the Chinese government thinks otherwise, and, has used the full power of the state to persecute the practitioners. Today's exhibition seeks to convey something of this persecution and of the courage, humanity and hope of the persecuted. The works are beautiful in themselves but are made more meaningful by the truths that they wish to convey." He continued, "I am quite convinced that freedom will prevail, ... and when that day dawns Falun Dafa will be practiced in China as elsewhere in the world."

A college director asked Ms. Eileen Browne, "How did you manage to get this exhibition hall? This is the first in our college's history."

One young woman couldn't help controlling her tears after seeing paintings about the persecution. She talked to practitioners for a long time. She could not believe that in this modern society, such brutal persecution still exists. She had just finished her art course and came to see the exhibition. A practitioner gave her a beautiful paper lotus flower when she left. She also took with her leaflets about Falun Gong for her classmates.

Many students viewed every artwork and listened to its explanation with great care.

A visitor inquires about information on buying the paintings

A woman from the Midlands specifically came to see the exhibition. She has practiced Falun Gong for eight months by herself. The practitioners attending the exhibition were very surprised to learn that she is a new practitioner. She wanted to view all artworks (because of the limitation of the exhibition hall, only part of artworks were exhibited).

Many people enquired if they could buy these artworks.

A security guard told the Falun Gong practitioners that one morning it was very quiet inside the building. It was very early so only him and a housekeeper were there. He said that from whichever direction he looked at the artwork, "Buddha Statue," Buddha's head would turn to look at him. He was very surprised and so he called the housekeeper over. She found the same situation. They felt that this exhibition was very extraordinary and the music was so beautiful, making people very calm and comfortable.

The local newspaper, The Echo, sent its reporter to interview Eileen Browne, and published the interview on Thursday. The article outlined the purpose and meaning of this exhibition and told its readers about the positive change in Ms. Browne's health after she started practicing Falun Gong. 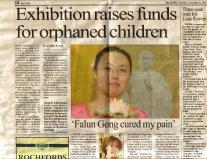 A report published in the local newspaper

During the exhibition, practitioners made many paper lotus flowers to give as gifts. These beautiful lotus flowers were deeply appreciated by students and teachers. The beauty and compassion of Dafa will remain in South Dublin.

“Nuremburg, Germany: Chinese Tourist Proclaims, "You are The Hope of China"”