(Clearwisdom.net) On December 9, 2005, on the eve of International Human Rights Day, Falun Gong practitioners in Portugal participated in a rally held at Rossio Square in Lisbon, the capital of Portugal, to expose the Chinese Communist Party's (CCP) violence and to support 6 million people quitting the CCP. The rally caught the attention of the Portuguese people. After reading the information on the display boards, people signed the petition in support of the Chinese people quitting the CCP. 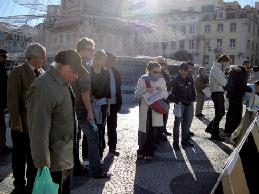 People are shocked at the CCP's violence, exposed by the photo exhibition

Located at the farthest west of Europe, Portugal used to be the most powerful empire on the seas, in possession of numerous overseas colonies. Since Antonio Salazar came to power as the chancellor in 1932, Portugal had practiced fascism. Under fascist rule, numerous dissidents were tragically persecuted or tortured to death. Nowadays, Portugal is a democratic country where people enjoy freedom of speech and freedom of belief. But people still have a vivid memory of the terrible dictatorship.

At 11:00 a.m., many banners were displayed on Rossio Square, reading, "Support 6,000,000 People Quitting the CPP," "The CCP Has Tortured and Killed 80,000,000 Chinese," "The Nine Commentaries Dissolves the CCP," and "No CCP and A New China." On one of the banners were printed photos of the CCP's criminal acts. These banners and photos drew the attention of tourists and citizens in Lisbon. Passers-by stopped to read the information and inquired about the persecution happening in China, particularly the brutal persecution against the Falun Gong practitioners that has lasted for over six years. 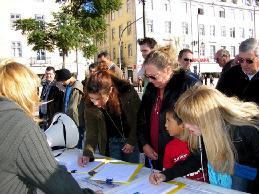 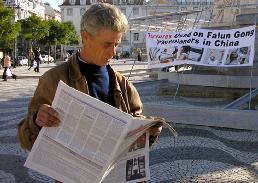 After reading the leaflet, a Portuguese sailor said, "My ship once had stayed in Shanghai for three months. I witnessed the scenes in which the Chinese police beat and scolded their citizens on the streets without following any legal procedures." After reading the information on the display boards, the sailor did not leave until the end of the activity. He offered to aid the practitioners in distributing the leaflets to the passers-by and informing people of the CCP's brutal atrocities against its own citizens.

A man from China asked for a leaflet and had a chat with the practitioners. He said, "I spotted your bustling activity on the square, with so many banners. I purposefully came here to take a look." Upon seeing the photos exposing the CCP's criminal behaviors and learning that over 6 million people have resigned from the CCP, he said, "The news is really inspiring."

From chatting with him, the practitioners learned that he had taken the initiative to quit the CCP four years ago because he disagreed with the CCP's wrongdoing. He continued, "I find it really hard to tolerate their (the CCP's) launching political movements all the time to persecute the citizens for no reason. The banner reads that 80,000,000 Chinese people have been persecuted to death. Though I do not know the exact number, I believe this is true. And I believe the number of the deaths is actually far greater. Each political movement would inevitably lead to numerous deaths. My mother has been sent to brainwashing centers several times only because of practicing Falun Gong. They deprived her of public office and confiscated her apartment, in their attempt to force her to renounce her belief. Thanks for standing up against the CCP's criminal behaviors."

Two Portuguese policemen were on duty on the square. At first they remained indifferent and refused to accept the practitioners' leaflets, saying that they could not accept any leaflets while on duty. Afterwards, they came towards the practitioners to ask for the leaflets because they were curious as to why so many passers-by were expressing intense concern over the rally and then signing the petition after seeing the photos and reading the leaflets. A look of solemnity appeared on the faces of the two police officers, when they came to realize that kind people are being persecuted, tortured and illegally imprisoned by the Communist regime. One of the police officers said, "We have two leaflets, but our colleagues don't have any. Please give us more. I will bring them to my colleagues in the hope that they can have a better understanding of the situation in China."

At 3:00 p.m., the rally came to an end. Many people were still reading the Nine Commentaries, Dafa newspapers and the leaflets..