Crisis Management Training Camp in Taiwan: "Thank You For Bringing Us Such A Wonderful Practice" (Photo)

(Clearwisdon.net) On the afternoon of December 6, 2005, Taiwan Falun Gong practitioners, who were especially invited by the organizers, introduced Falun Gong at a Crisis Management Training Camp in Taipei. The introduction was warmly received.

Over 70 psychiatric counselors from all over Taiwan, people who, by profession, are concerned about peoples' mental and physical health, participated in the five-day training camp. Topics discussed at the training camp included how to guide people to face crises, how to assist rehabilitation after disasters and other issues. The intensive training session was attended by an expert from the US. 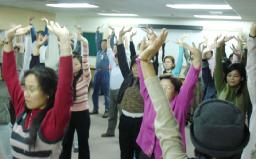 Over seventy counselors attentively learn the exercises of Falun Gong

As a practice focusing on the improvement of mind and body, the Falun Gong group was invited to participate in the experience sharing and to teach the exercises.

After watching a documentary about the September 11th terrorist attack in the US, everyone was silent. To lighten up the atmophere, the host said: "To cheer everybody up, now let's welcome Falun Gong, which has spread to more than 70 countries with over 100 million practitioners. Please welcome these several gentlemen (who may have become handsome because of practicing Falun Gong) to share their experiences."

Accompanied by applause, practitioners then went onto the stage and shared some small stories about learning to look inside when facing conflicts and how to be more tolerant by following the guiding principles of Falun Gong, "Truthfulness-Compassion-Forebearance." They also shared how their own personal changes had benifitted not only themselves, but also brought positive changes to their family members and friends.

The first practitioner stated that natural disasters could quite possibly be attributed to a downslide in morality. The practitioner also said, "Falun Dafa teaches practitioners to put others first in any situation. Such a teaching has shown me how to rationally think from the other person's point of veiw, even if I feel hurt by another person and I am suffering myself. In this way, conflicts are always resolved peacefully."

A practitioner from Germany said that he started to practice martial arts when he was young. Though he had strong muscles, he didn't feel self-assured until he met a Chinese lady who taught him Falun Gong. Through practicing Falun Gong, he discovered the profound meaning of the ancient Chinese arts of cultivation. Regarding the fact that the CCP (Chinese Communist Party) and Jiang Zemin have been using the whole state machinery and media to persecute such a popular practice which has benefited millions of citizens and uplifted social morality, he said that it was truely hard to imagine any government would suppress such a good practice.

Another practitioner shared about how his chronic rheumatism was healed without his taking a single pill soon after he started to practice Falun Gong. In addition, he mentioned a health survey among Falun Gong practitioners from all over Taiwan which was conducted 3 years ago. The survey showed that nearly 80-900f the practitioners, as they became healthy, no longer needed to use their healthcare cards after practicing.

With the demonstrations and instruction from the practitioners, the 70+ trainees started to learn the exercises attentively. While learning the exercises, the crisis management expert from the US repeatedly said: "Thank you for bringing us such a wonderful practice."

Practitioners brought ten copies of Zhuan Falun and ten copies of the Falun Gong Exercise Instruction VCD, as well as many Falun Gong introductory materials to the training camp. Everything was taken right away. Many trainees asked for practice site information and thanked the practitioners for sharing their experiences and teaching the exercises.

Later, at the practice site, someone from the training camp who was a social group leader invited practitioners to introduce Falun Gong to his organization in the near future.