"You have brought us good weather!" A university contact person welcomed a regional representative of the International Society for Human Rights (IGFM) and Falun Gong practitioners. The gloomy and cold winter day all of sudden turned into a sunshiny warm day right before the arrival of the group. 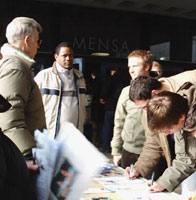 Upon hearing that there was a signature collection drive to end the persecution of human rights, many students signed without any hesitation. Some of them also brought their classmates to sign the petitions. After viewing the paintings by practitioners depicting some of the appalling torture methods used by CCP against practitioners, a great number of students also signed a petition calling for immediate release of detained practitioners. Though some students initially misunderstood Falun Gong due to the CCP's overseas propaganda, they said that they finally understood after hearing the practitioners' truth-clarification. Some stood in front of the paintings for a long time, pondering why such brutality could have happened.

After the students signed the petitions, they would receive a small gift, either a bookmark or a greeting card. They all liked the Chinese characters on the gifts and tried to pronounce them. Therefore, now and then one could hear someone saying, "Falun Dafa Hao" [Chinese for "Falun Dafa is Good!"] with a strong German accent.